NO HIGHWAY IN THE SKY On Blu-ray From Kino 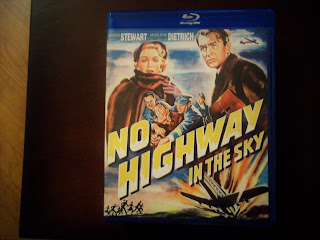 It's another classic film release from Kino Lorber, this time a somewhat obscure feature starring the one and only James Stewart.

NO HIGHWAY IN THE SKY (1951) has Stewart as a fidgety aeronautics expert named Theodore Honey. Based in England, Honey is convinced that a new type of airplane known as the Reindeer will have its tail break off after 1400+ hours of flight time. His British superiors doubt his claims, but they decide to send him to Canada to investigate the recent crash of a Reindeer. The quirky Honey has never actually flown in a plane before, and his trip gets more interesting when he finds out that he's on board a Reindeer that is approaching the 1400 hours mark. Honey tries in vain to tell the flight crew that they are in danger. The plane makes an emergency landing as soon as it crosses the Atlantic, and a special inspection is carried out. When nothing unusual is found, the crew make preparations to continue on--which forces Honey to commit an act totally against his retiring nature. The act causes Honey's mental state to be called into question, and his theories on airplane metal fatigue may wind up being totally rejected.

Jimmy Stewart is one of my favorite actors of all time, but even I'll admit that in the beginning of the film he lays on the absent-minded professor act rather too thick. (Honey's mind is so preoccupied that he doesn't even know if he's in his own home.) Despite his nerdy portrayal (years before the term nerd came into widespread use), Stewart does more than adequately convey Honey's desperation and frustration at his warnings not being taking seriously. NO HIGHWAY IN THE SKY was filmed entirely in England, and the fact that Stewart was the only American member of the cast makes his character seem even more of an outsider. During the climax Honey must face a review board, and as the man passionately defends himself one can't help but recall other Stewart roles such as Jefferson Smith and George Bailey. Despite Honey's eccentricities and nervous tics, the fact that he is played by James Stewart makes the audience believe the man and take him seriously.

On Honey's fateful airplane trip he meets up with famous actress Monica Teasdale, played by Marlene Dietrich. Dietrich is basically playing herself, and it's fun to see her and Stewart reunited years after their famous teaming in the 1939 DESTRY RIDES AGAIN. Teasdale starts to feel warmth and sympathy toward Honey, as does kindly flight attendant Marjorie Corder (Glynis Johns). The attention paid to Honey by both women (especially the flight attendant) seemed a bit forced to me--the movie spends an inordinate amount of time showing how Honey doesn't function very well around people, and now two attractive women are showing an interest in him? (I wished that worked for me.) The women even go so far as to befriend the widowed Honey's young daughter, played by Janette Scott. Scott, who would grow up to become something of a scream queen in the 1960s, gives a wonderful performance here (the girl has more common sense than Honey does, and she's a lot more stable). Even though Marlene Dietrich gets second billing, Glynis Johns has the bigger (and more important) role.

The fact that this movie was filmed in England allowed it to use a number of fine British actors in the cast, such as Jack Hawkins, Kenneth More, Niall MacGinnis, and Maurice Denham. These gentlemen give the proceedings an air of believability (why is it that we always take actors from the U.K. more seriously than their American counterparts?).

NO HIGHWAY IN THE SKY was directed by Henry Koster. Koster and James Stewart worked together on five films, the most famous being HARVEY. Koster was responsible for such titles as THE BISHOP'S WIFE and THE ROBE, but he's one of those Hollywood studio-era directors who are almost forgotten today. There's nothing showy about Koster's direction here--the story is presented in an efficient, understated manner that allows the actors to shine. Koster's son Bob participates in the audio commentary, along with the main speaker, film historian Jeremy Arnold. Arnold thoroughly discusses all aspects of the production, and asks Bob Koster several questions about his father's career in making movies. It's a talk worth listening to. The visual quality of the film, which was shot in full frame black & white, is excellent.

NO HIGHWAY IN THE SKY is definitely a star-driven vehicle. James Stewart carries the picture, and his natural sincerity and integrity make the audience accept an unusual person like Theodore Honey. I consider the film to be okay, not great (the climax solves everything a bit too neatly). Fans of Jimmy Stewart will appreciate this Blu-ray the most.