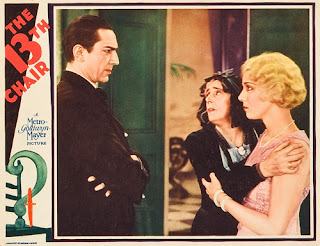 I have to credit YouTube once again for my latest first-time viewing. THE THIRTEENTH CHAIR is the 1929 film version of a creaky play by Bayard Veiller. It is the first sound film directed by cult legend Tod Browning--and one of the film's stars is none other than Bela Lugosi. Yes, this means that Browning and Bela worked together before their seminal collaboration on Universal's 1931 DRACULA.

THE THIRTEENTH CHAIR concerns murders among a group of upper-class Brits in colonial India. A caddish playboy has been stabbed to death, and the murder weapon is missing. A friend of the victim arranges a seance with a phony medium, hoping to scare the perpetrator into confessing the crime. Another murder happens during the seance, and it's up to the intimidating Inspector Delzante (Bela Lugosi) to figure out the mystery.

With a combination of Browning, Bela, and murder, one expects THE THIRTEENTH CHAIR to feature all sorts of classic thriller highlights. Unfortunately, it doesn't. The murder mystery is nothing special--the assembled group of stuffy English characters seem to belong to a mediocre Agatha Christie novel. The only part of the story that reminds the viewer of Browning's usual macabre tone is when a dead body is used to finally get the murderer to crack. THE THIRTEENTH CHAIR is basically a filmed stage play (it must be pointed out that most of Browning's films were based on stage plays), and when you add in the fact that it is also a very early sound film, the result is a rather dreary visual style. The film may be set in India, but the only local culture we are shown are a couple of native servants who do nothing but stand around and look suspicious.

The supporting cast does offer up a few noteworthy faces. Holmes Herbert, a longtime movie character actor who appeared in literally hundreds of titles, plays a British aristocrat, and the gorgeous Leila Hyams is the leading lady (and one of the main suspects). Holmes Herbert would show up in a number of classic horror films, and Hyams would work again with Tod Browning (in FREAKS) and Bela Lugosi (in ISLAND OF LOST SOULS).

The real star of THE THIRTEENTH CHAIR is without a doubt Bela. The actor doesn't pass up a chance to make an impression--every line he utters becomes a grandiose declaration. Lugosi's Delzante isn't just determined to trap the killer--the man seems particularly aggravated by the entire scenario. We don't know why the Inspector has such a ticked-off attitude (was he on his way to a golf game or something when he got called in to work the case?), but he definitely isn't playing the "good cop" role. There are some who will watch THE THIRTEENTH CHAIR and come to the conclusion that Bela is pretty hammy--but if he wasn't, the movie would be a total slog to get through. The fact is Bela gives the film all the verve it has. There's a longstanding tradition of using a quirky detective to make a typical murder mystery more noticeable, and Lugosi fulfills that role in spades. Apparently in the original play that this movie is based on, the Inspector character was not an exotic foreigner. Someone at MGM (Tod Browning himself?) must have seen Lugosi on stage as Dracula and figured that he would inject some sorely needed panache to an old-fashioned story.

After the 1931 DRACULA Lugosi would almost never get the chance to play a major "normal" role like that of Delzante (it has to be admitted that Delzante is about as far away from a normal Inspector as you can get). THE THIRTEENTH CHAIR is a treat for Bela fans because it shows that the actor could take an underwhelming part and make it stand out through the sheer force of his acting personality. Lugosi has a lot of dialogue here, and he handles it very well. (It goes without saying that no one could recite lines like Lugosi did.) The part of Delzante is more evidence that the idea of Bela having a limited understanding of English is mostly myth.

Tod Browning detractors will use THE THIRTEENTH CHAIR as an excuse to denigrate the man's work as a director. In defense of Browning, he did cast Lugosi and give the actor plenty of leeway to steal the film. (Remember that at this time Bela was mostly unknown among movie patrons.) THE THIRTEENTH CHAIR may seem like an unlikely subject for Browning to take on, but one of the main themes of the film is trickery--a theme that runs through almost all of Browning's films as a director. (There are two other versions of the film--one made in 1919 and one made in 1937--I have not seen either.)

Today THE THIRTEENTH CHAIR has two main points of interest: Tod Browning and Bela Lugosi. The movie is only 72 minutes long but it feels much longer. Its importance lies in its historical value--if Bela Lugosi had not made an impression on Tod Browning during the making of this film, would the actor have been cast as Dracula a few years later? As far as I know, the film is not available officially on home video. I assume that one day it will eventually be released through the Warner Home Archives, hopefully with an audio commentary by someone like Greg Mank or Gary D. Rhodes. It is certainly worth seeing for hardcore Bela Lugosi fans.
Posted by Dan Day, Jr. at 2:41 PM