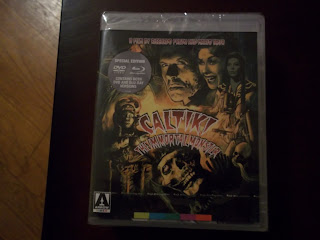 The 1959 Italian science fiction/horror film CALTIKI THE IMMORTAL MONSTER may not be magnificent, but the Arrow Blu-ray of this title certainly is. Jam packed with relevant extras, CALTIKI gets the type of treatment that most mainstream box office hits do not rate.

CALTIKI was a collaboration between two famed cult filmmakers: Riccardo Freda and Mario Bava. The movie's direction is officially credited to Freda, but he left before the end of production, and Bava took over. As director of photography and creator of special effects, Bava's contribution to the film was probably more than Freda's in any event. CALTIKI is a low-budget monster flick, but a master of the fantastic like Bava makes much more out of it than a viewer would expect.

The story of CALTIKI is set in Mexico, where a scientific expedition investigating Mayan ruins has inadvertently unearthed a gruesome creature called "Caltiki" after a Mayan Goddess. Caltiki resembles a slimy mass of pulsating flesh, and it has the ability to divide and grow to enormous proportions. Dr. John Fielding (John Merivale), the leader of the expedition, discovers that fire is the only force that can defeat Caltiki....but can he save his wife and child in time?

CALTIKI is a wild fusion of giant monster sci-fi and Lovecraftian cosmic horror. Radiation plays a part in Caltiki's reign of terror, as it usually does in this type of story, but the idea that the creature has lived for eons, and may have been the reason for the destruction of the Mayan race, brings a mythic tone to the proceedings. The movie is very reminiscent of similar films such as THE QUATERMASS XPERIMENT, X THE UNKNOWN, and of course THE BLOB. I also believe that THE CREATURE FROM THE BLACK LAGOON--in which a group of white English-speaking scientists disturb a legendary monster residing in a hidden Latin American grotto--may have been an inspiration for CALTIKI as well. Bava's sublime black & white photography also brings a touch of Universal Gothic, as does Roberto Nicolosi's music.

CALTIKI is rather gory compared to other films of its type made during the same period. The monster literally shreds human beings to the bone, and it turns one of the members of the expedition, played by Gerard Haerter, into a human monster. The actual Caltiki was made of tripe, and as it slithers and writhes its way through the film, there's a disturbing aspect to it. The movie has a few drawbacks--even at only 76 minutes, there's more than a few scenes that feel like padding. The dialogue (in both English and Italian versions) is very clunky, and leading actors John Merivale and Didi Sullivan are somewhat bland (Didi is rather attractive). Gerard Haerter can't help but steal the film from all the other human performers, since he has the showiest role. The real star of CALTIKI is without doubt Mario Bava. The practical effects he whipped up for this film may seem quaint to audiences of today, but when one takes into consideration what he had--and didn't have--to work with, Bava has to be looked upon as a true creative genius of cinema.

Arrow Video brings us a fantastic, sharp as a pin print of CALTIKI (with Italian credits), presented in 1.66:1 anamorphic widescreen. CALTIKI is one of those features that seemed to be only available on YouTube or grey market home video, so Arrow's version has to be considered the definitive one. The movie has both Italian and English voice tracks, along with English subtitles. A full-frame presentation of the film is included, along with an alternate U.S. credit sequence, and a original U.S. trailer.

Arrow gives us two audio commentaries from writers Troy Howarth and Tim Lucas. Two commentaries may seem like overkill, and there is some overlap between the discussions....but both talks are welcome and informative. Both men have written books about Mario Bava, and they are both experts on Italian fantastic cinema. Listening to both commentaries will give one just about all the information that is needed about CALTIKI. There's also a short interview with the prolific Kim Newman, who places CALTIKI in context with other fantastic films of the 1950s. Luigi Cozzi gives a short discussion on the film, and Stefano Della Casa briefly talks about Riccardo Freda. A 36-page booklet is included, which has essays about CALTIKI by Kat Ellinger, Roberto Curti, and Tim Lucas, and stills and poster art from the film. As usual with Arrow releases, a DVD version of CALTIKI is part of the package, along with a reversible cover sleeve.

Arrow has pulled out all the stops for this disc. Some may ask, "Is a movie like CALTIKI worth it?" I say, "Why not?" For me, inside knowledge on a production like CALTIKI is far more interesting than the typical fluff pieces trotted out for the average modern-day blockbuster. I have a feeling this Blu-ray is going to wind up on my annual top five list at the end of the year.