THE INDIAN FIGHTER (1955) is a Cinemascope Western starring Kirk Douglas, with a fantastic cast of supporting actors--Walter Matthau, Lon Chaney Jr., Alan Hale Jr., Hank Worden, Elisha Cook Jr., and several other faces that will be familiar to fans of American retro television. Kino has just released the movie on Blu-ray. I had never seen it before, and while it's more of a B type of Western, it does have its moments. 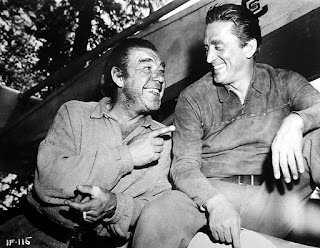 Kirk Douglas plays Johnny Hawks, a frontier scout in the post-Civil War American West. Johnny tries to keep the peace between a band of Sioux Indians and the settlers at a nearby fort. Johnny attempts to lead a wagon train through Sioux country, but he's distracted by the Sioux Chief's beautiful daughter (Elsa Martinelli) and foiled by a couple of vicious scalawags (Walter Matthau and Lon Chaney) who are after gold.

THE INDIAN FIGHTER was directed by Andre De Toth, who is best known for helming the 3D classic HOUSE OF WAX. De Toth did make a number of very good Westerns, including a few with Randolph Scott. He uses the Cinemascope format very well, and makes excellent use of the movie's Oregon locations. The story moves along quickly, and a "Indians attacking the fort" sequence at the end of the film is impressively mounted.

Kirk Douglas is intensely energetic as usual, leaping on and off of horses, and of course, fighting Indians (at one point he takes part in a Native American version of a joust). It's a bit hard, though, to really like Douglas' character because of the way he "romances" Elsa Martinelli's native girl. He basically assaults her--and she responds to it, bringing up all sorts of unpleasant connotations. It doesn't help that the Italian Martinelli seems more like a peasant girl from Rome instead of a true Native American. The beginning of the film features Martinelli skinny-dipping, with Douglas looking on approvingly.

This is Walter Matthau's second film, and he's very devious as the "brains" between him and his partner, Lon Chaney Jr. Lon plays another of his brutish simpleton roles (at least this time he gets some dialogue). The story puts the blame on Matthau and Lon Jr. for all the trouble--they are the ones who get the Sioux riled up by trying to find gold on native land. 21st Century viewers may be dismayed by non-Native American actors "playing injun", but this movie is a lot more sympathetic toward the Sioux than one would expect from the title. This was the first production made by Kirk Douglas' own company, and his ex-wife Diana Douglas has a role as a settler interested in Johnny Hawks.

Kino presents THE INDIAN FIGHTER in anamorphic 2.35:1 widescreen. The movie looks very good. The major extra is an audio commentary from Toby Roan. He gives out many production factoids about the film and the actors, but not much critical analysis (there's also a lot of silent stretches).

I would say that THE INDIAN FIGHTER is an above-average Western, but not a great one. The movie's best attributes are the glorious locations photographed in Cinemascope. The script has a lot of cliches, but a few interesting touches as well (Ben Hecht, of all people, is one of the credited writers). It's the type of movie best appreciated by film buffs. 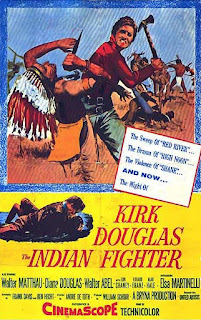