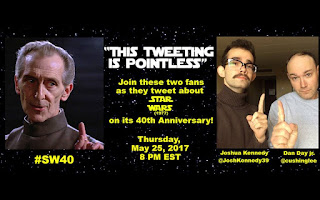 Thursday, May 25, is the exact 40th anniversary of the original theatrical release of STAR WARS. How can we celebrate such a momentous occasion? One way is to hold a Tweetathon--which means everyone gets out their personal home video copies of STAR WARS, starts them all at the same time, and goes on twitter and makes all sorts of brilliant comments while the movie is playing.

This Tweetathon is being co-hosted by my good friend, independent filmmaker Joshua Kennedy. I can assure you that Josh feels the same way about STAR WARS as I do--the both of us could probably tweet ever single line of dialogue, in order, without watching the movie. Josh and I have held a Tweetathon before--we covered THE GORGON, and I think about two or three people participated. Hopefully the 40th anniversary of STAR WARS will attract more attendees.

I assume that nearly everyone has STAR WARS on DVD or Blu-ray--and if you don't, what is wrong with you?? For the purposes of this Tweetathon, I am going to be playing the Blu-ray version of STAR WARS that was released in 2011. I realize that this is not the version of the film that came out 40 years ago. I do have that version on DVD--when the Star Wars Trilogy was re-released on home video in 2006, the original theatrical versions of the films were included as a "bonus". I know that many folks do not have these DVDs, which is why I'll be playing the Special Edition of the film. I'd like to get as many people involved as possible, so whatever version of the film you have, you are more than welcome to join in.

The start time for this Tweetathon will be 8 PM, American Eastern Standard Time, on Thursday, May 25. The hashtag we will be using on our tweets will be #SW40. Josh's twitter handle is @JoshKennedy39, and mine is @cushinglee. If you have any questions or suggestions about the Tweetahon, please leave a comment below.

I'm really excited about this project--I think I can speak for Josh when I declare that this movie has had more influence on us than any other type of filmed production. So please join us on twitter for the 40th anniversary of the greatest movie ever made--and may the Force be with you.