AND NOW THE SCREAMING STARTS On Blu-ray From Severin 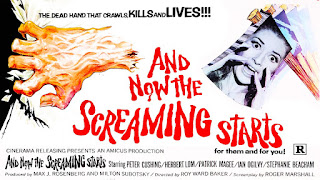 34 years ago from this very day--February 11, 1984--the SON OF SVENGOOLIE program on WFLD-TV 32 Chicago showed AND THE NOW THE SCREAMING STARTS. It was the very first time I had seen the film, and 34 years later, I'm now writing a blog post on its Blu-ray release as part of THE AMICUS COLLECTION box set. (For those who didn't grow up watching the Son of Svengoolie, he's now just Svengoolie, and he's now shown nationwide on the MeTV channel--I watched him last night.)

AND NOW THE SCREAMING STARTS is a departure from the usual Amicus fare. It's not a anthology film and it is not set in contemporary times. In this one Amicus really does venture into Hammer territory, as the movie is a dark Gothic melodrama featuring outstanding period costumes and decor. The production also makes great use out of Oakley Court, the English estate that was the Buckingham Palace of British horror films.

In late 18th Century England, Charles Fengriffen (Ian Ogilvy) marries the young and beautiful Catherine (Stephanie Beacham). As soon as Charles and Catherine arrive at the family estate, the new bride starts seeing disturbing visions, and she claims she has been assaulted by an unknown phantom. A number of mysterious deaths start occurring, and finally Charles allows a specialist of the mind to be called in--Dr. Pope (Peter Cushing). Pope's investigations lead him to confront Charles about a horrible incident involving his grandfather, Henry Fengriffen (Herbert Lom). The incident resulted in the Fengriffen family being cursed, and not even the rational and scientific Pope cannot stop the tragedy about to unfold.

I've always had a fondness for movies I originally saw as a kid for the very first time on Svengoolie. AND NOW THE SCREAMING STARTS does have many things to recommend it. The movie is probably the most sumptuous looking Amicus film ever, due to the cinematography of Denys Coop and the art direction of Tony Curtis (not that one). English Gothic fans extol the virtues of Hammer production designer Bernard Robinson--and rightly so--but Tony Curtis should get some respect for his overall work for Amicus, especially since he didn't have much of a budget to work with either. The movie goes out of its way to showcase Oakley Court--there's a magnificent slow tracking shot of the estate at the beginning of the film. Douglas Gamley contributes a lush music score. The costumes in the film are exquisite--particularly those for Stephanie Beacham, who is simply stunning in them. I would even venture to say that Beacham never looked better on screen than she did here.

Stephanie Beacham didn't just look fine, she also gave an outstanding performance as Catherine. It's a difficult character to play, since the woman is beset by all sorts of dangers throughout the story but is given absolutely no help whatsoever by those around her. The look on Beacham's face at the end of the film as she realizes the full power of the Fengriffen curse is the most haunting thing in the story.

The film does have many drawbacks as well. There's very little buildup at all--as soon as Catherine steps into her new home she starts getting spooked. We don't even get to know what type of people Charles and Catherine are. I think the story would have worked better with some ambiguity to it--from my point of view it's established very early on that the events that Catherine is experiencing are supernatural. Ian Ogilvy also looks splendid in period costume but he's stuck with a rather thankless role--the husband comes off as weak and indecisive. (Ogilvy does get to go bonkers during the climax.) Roy Ward Baker does a adept job of direction, but the movie winds up being an uneasy mixture of Gothic romanticism and early 1970s horror movie shock tactics.

AND NOW THE SCREAMING STARTS has a nastier tone than the usual Amicus product, with such things as rape, cursed babies, and bloody crawling hands. (There's so much material here involving hands being chopped off that one wonders if the movie influenced George Lucas.) The flashback which reveals the origin of the curse is very reminiscent of the beginning of Hammer's THE HOUND OF THE BASKERVILLES. Some have even said that Peter Cushing's Dr. Pope has a bit of Sherlock Holmes in him as well. Cushing doesn't show up until the movie is halfway over (I remember how I kept waiting for him to appear when I first watched this on Svengoolie). As usual, Cushing brings his quiet dignified authority to the role, but Pope doesn't really succeed in doing much of anything. (The rather off-putting wig that Cushing wears here would be used by the actor again when he starred in FRANKENSTEIN AND THE MONSTER FROM HELL.)

Like most Amicus productions, AND NOW THE SCREAMING STARTS is stocked with a number of fine character actors, such as Patrick Magee, Guy Rolfe, and Herbert Lom, who steals the show as the vile Henry Fengriffen. Janet Key plays a maid in the Fengriffen household, and her presence here, along with that of Cushing and Beacham, makes this movie a sort of DRACULA A.D. 1972 mini-reunion.

I already owned AND NOW THE SCREAMING STARTS on DVD--it was released by Image Entertainment as part of their "EuroShock Collection". Severin's Blu-ray of the title does look better, and I would say that out of all the films in THE AMICUS COLLECTION box set, this one has the best visual quality. The extras include two audio commentaires: one with Ian Ogilvy that appeared on the Image DVD, and one featuring Roy Ward Baker and Stephanie Beacham. Both commentaries are worth listening to, and those involved in them bemoan the movie's title, which was bestowed on it by Max Rosenberg. There's a short archival audio interview of Peter Cushing by Denis Meikle, and Meikle appears in a new featurette in which he gives his opinion of AND NOW THE SCREAMING STARTS (he's not all that impressed with it.)

The best extra on the disc is a presentation called "The Haunting of Oakley Court". Horror film historians Allan Bryce and David Flint visit the famed location, which is now an expensive hotel/resort. The men relate Oakley Court's history and how it came to be used for so many British horror features. At one point the duo go inside the place and walk down a hallway which is adorned by posters of the numerous movies that featured Oakley Court--and one of them is THE OLD DARK HOUSE....but it's the James Whale version, which was made in Hollywood!! (If you stay at Oakley Court and point this out to the staff, do you get a discount on your bill?) The duo also go over to nearby Bray Studios--but the closest they can get to it is by looking at it from across the Thames river. A trailer for the film and a short radio advertisement is also included, which states the movie's R rating in America (Peter Cushing is the only person connected with the film mentioned in the radio spot).

Many English Gothic aficionados can't stand AND NOW THE SCREAMING STARTS. I don't hate it, but it is an uneven departure from the Amicus tradition.