THE PROJECTED MAN On Blu-ray From Shout Factory 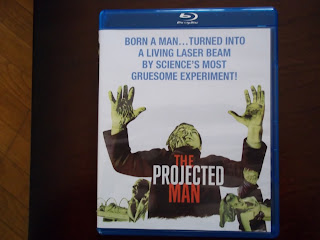 THE PROJECTED MAN (1966) was produced to be part of a British science-fiction double bill along with ISLAND OF TERROR. ISLAND OF TERROR is now fairly well known, due to its starring Peter Cushing and being directed by Terence Fisher. THE PROJECTED MAN fell into obscurity--even I had never seen it, nor do I remember it ever being shown on TV in my area. Under its Scream Factory label, Shout Factory has finally given the film an official American home video release.

Despite its being made in the mid-1960s, THE PROJECTED MAN seems more like it was made in the 1950s. Brilliant, determined scientist Paul Steiner (Bryant Haliday) has developed a way to project matter from one place to another while working at a secretive research foundation. Steiner's work puts him into conflict with the smarmy head of the foundation, Dr. Blanchard (Norman Woodland). Blanchard is actually scheming with industrial spies to undermine Steiner's project and steal his findings. Steiner is helped by Dr. Chris Mitchel (Ronald Allen) and Dr. Patricia Hill (Mary Peach), a former flame of Steiner's. The trio attempt to show off their experiments for a famous scientist from Geneva, but the test has been sabotaged by Blanchard. Seething with anger, Steiner decides to project himself--and, this being a classic sci-fi/horror film, the results go horribly wrong. Steiner is hideously disfigured, and he now has the ability to fry any matter (or any human being) with just the touch of his damaged right hand. Steiner uses his deadly powers to exact revenge on his enemies, while Pat and Chris work to stop him.

THE PROJECTED MAN can't help but remind the viewer of other similar films such as the original THE FLY and THE 4D MAN. It also throws a few nods to THE QUATERMASS XPERIMENT. When Steiner explains how his matter projection device works, it reminded me of the transporter in the Star Trek Universe--and I also realized that the Wonka Company was working along the same lines as Steiner in WILLY WONKA AND THE CHOCOLATE FACTORY!. The laboratory in which Steiner's projection device is located looks very much like a small TV studio, and the large laser that is used in the experiments resembles a futuristic TV camera. (Ironically the man who directed most of this film, Ian Curteis, spent most of his career working in television.) The projection device is visually striking, and the sound effects that are used when the machines are in operation reminded me of the hum of a Seventies tabletop electronic football game.

THE PROJECTED MAN is an okay movie, but it takes a while to get going, and it seems longer than its 77 minute running time. Bryant Haliday is very good as Steiner, but the story doesn't develop his character very much before his "accident", thus lessening whatever sympathy the audience might have felt for him. He does get to wear an effectively gruesome facial makeup during his after-projected state. The movie spends too much time showing a budding romance between Dr. Mitchel and Dr. Hill (Steiner is jealous of their relationship, but this subplot doesn't amount to much). The excitement that should result from the aftermath of Steiner's projection gets watered down by too many "police inspector questioning people about things the audience already knows" scenes. The circumstances behind Blanchard's decision to ruin and steal Steiner's project isn't properly explained--was it industrial espionage, or the influence of a foreign power?

What also hurts THE PROJECTED MAN is that the cast doesn't have any of the usual faces seen in other British genre pictures made around this time. (Hammer veteran Sam Kydd does have a very small role as one of the Projected Man's first victims.) Overall, the cast plays their roles competently, but I wouldn't say any of them stand out in particular. A small slice of Scream Queen glamour is provided by Tracey Crisp, who plays a secretary for the scientific foundation. At one point she strips down to her skivvies, and the Projected Man encounters her and carries her off in the traditional classic monster movie manner.

Shout Factory has released THE PROJECTED MAN in 2.35:1 anamorphic widescreen, and even though the colors are not too vibrant, the visual quality of the film is very fine. The various sound effects come out very strong on this disc. There are a number of extras, such as short interviews with director Ian Curteis, Mary Peach, production designer Peter Mullins, sound editor Brian Blamey, and composer Kenneth V. Jones. Taken together the interviews provide insight into the making of the production--Curteis explains that he was signed to a four-week contract, and when his time was up the movie was over budget and one of the producers, John Croydon, finished directorial chores. The alternate British opening to the film is included, and I would advise anyone who might want to purchase or watch this Blu-ray to play the British opening first, and then the actual film. The British opening shows Steiner and Mitchel using the matter projector on a guinea pig, and it also establishes the friction between Steiner and Blanchard, and leads right into the American beginning of the film. A number of deleted scenes are here as well (none of them are all that important). There's also a still gallery.

Having finally seen THE PROJECTED MAN, I have to say it's not as good as ISLAND OF TERROR--but it is an okay late night sci-fi monster flick. It was made to fill out a monster movie double bill, and it gives what you expect out of it. Shout Factory has done film buffs a service in putting this title out on Blu-ray in such an impressive manner.