CHARLEY CHASE AT HAL ROACH: THE TALKIES VOLUME ONE 1930-31 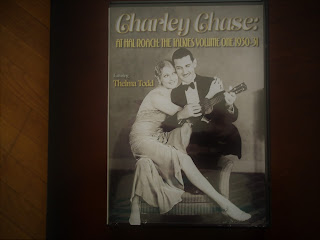 The Sprocket Vault has released a magnificent DVD set of classic comedy shorts produced at the Hal Roach studios and starring Charley Chase. CHARLEY CHASE AT HAL ROACH: THE TALKIES VOLUME ONE 1930-31 contains 18 shorts and bonus material as well.

Charley Chase (real name Charles Parrott) isn't as famous as some of his comic contemporaries, but he was involved in some of the best comedy films produced during the silent and early sound era as either a performer, writer, or director. Before finding a place with Hal Roach, Chase worked alongside Mack Sennett, Charlie Chaplin, and Fatty Arbuckle, and he would wind up starring in his own series at Columbia where he even directed some Three Stooges shorts. I would describe Charley's typical character persona as that of an amiable goofball who would regularly find himself caught up in farcical or embarrassing situations. The plots of Charley's movies bear a great deal of resemblance to the episodes of later classic American TV sitcoms.

Those who are fans of Our Gang and Laurel & Hardy will find plenty of familiar faces appearing in the shorts here, such as Edgar Kennedy, Charles Hall, Billy Gilbert, Anita Garvin, and James Finlayson. The Crane Twins even recite the titles on a few of the films ("WE THAAANK YOU"). The most familiar (and beautiful) face of all that supports Charley in this set is that of Thelma Todd, who appears in almost half of the films. When viewing these shorts the chemistry between Thelma and Charley becomes obvious (they apparently had some off-screen chemistry as well). Thelma makes such an impression in the titles she appears in that the ones that don't feature her feel as if they have something missing. There's a huge cult around Thelma Todd, and anyone belonging to it should purchase this set just for her alone.

What comes out the most in this set is how gifted and capable a comic performer Charley Chase was. His movies focused more on the unusual situations his characters found themselves in instead of wild slapstick. Charley wasn't as strange looking as most film comics during this time, but he was still able to use his facial reactions to bring over the gags. Charley was also a talented musician, and these shorts provide him with many opportunities to sing and play. Most important of all is that the shorts show that Charley had an appealing screen presence that will still make him likable to audiences today.

The shorts are split up on two different discs. The highlights on Disc One include DOLLAR DIZZY, where Charley and Thelma Todd play millionaires who are trying to avoid golddiggers at a swanky resort, and HIGH C'S, which has Charley serving in World War I and wooing French barmaid Thelma. ROUGH SEAS, which appears on Disc Two, is a direct sequel to HIGH C'S--so much so that one could edit the two shorts together and make a feature film out of it. Charley sings and plays music in both titles, and Thelma gets to use an undeniably cute French accent. Disc Two also has THE PIP FROM PITTSBURG, which has been called one of the greatest short comedies ever made. In this one Charley is cajoled by his friend into going on a blind date. Charley is so annoyed by the situation he decides to show up as slovenly as possible--but then he finds out that the girl is Thelma Todd, which causes him to drastically (and hilariously) change his plans. The fact is that all of the shorts included on this set are of above-average quality, especially to those who are used to the elements of classic film comedy.

Disc One of this set has a poster & stills gallery, and Disc Two features a version of THE PIP FROM PITTSBURG made for Spanish-speaking audiences titled LA SENORITA DE CHICAGO. (The Roach Studios made several foreign-language versions of their product during the early 1930s.) All the shorts in this set have audio commentaries from Richard M. Roberts. During most of the shorts Roberts spends a great deal of time giving extensive biographical and movie career information on the numerous bit players and supporting actors who appear in them. Roberts mentions that he does this because many of these folks have never had their lives properly discussed in any format. He does provide the listener with voluminous knowledge on what was going on at the Hal Roach studios at the time these films were made. I must commend Roberts on calling out those poor souls who would rather obsess over Thelma Todd's death than spend time appreciating her talents. Roberts also puts the kibosh on all those ridiculous rumors surrounding Thelma's tragic demise. These commentaries are very worthwhile to listen to, and they give a wealth of detail and background on each short.

Each disc contains a disclaimer which states that even though the shorts were digitally restored, the visual quality is far from perfect. I personally felt that the shorts all looked at least presentable--though some of them look better than others, none of the titles are in a horrible condition.

I really cannot recommend this set highly enough. The Sprocket Vault has done a wonderful job on this collection, and hopefully this will sell well, because Richard Roberts makes mention of further sets in the future. I certainly hope that is the case--I'd love for The Sprocket Vault to do an official release of the Thelma Todd-Zasu Pitts-Patsy Kelly comedies. Charley Chase may not be as famous as Our Gang or Laurel & Hardy, but that may be due to the fact that his films just haven't been presented as often. This set may help rectify that.