Christopher Nolan's DUNKIRK was a film that I was quite impressed with--so much so that I named it as my favorite movie of 2017. A few days ago I was able to view the 1958 film of DUNKIRK. This movie doesn't have the technical or editing virtuosity that the 2017 film has, but it is impressive in its own understated way. The '58 DUNKIRK was made by Ealing Studios, and it was produced by Michael Balcon and directed by Leslie Norman.

The 1958 DUNKIRK opens in Spring, 1940, and depicts an England that has seemingly grown comfortable with what was called the "Phoney War". Bernard Lee plays a cynical reporter who is convinced that the U.K. is not ready for what is to come. Richard Attenborough is a small businessman whose garage has been converted to make belt buckles for the army, enabling him to make more money. Lee's character is a bit disdainful of Attenborough's acceptance of the situation.

Meanwhile in France, an ordinary corporal played by John Mills is eager to find out what is really going on. The Wehrmacht soon begins to overrun the country, causing the Allies to fall back. During the retreat, Mills' corporal is unexpectedly thrust into a leadership role when the small group of men he is with are cut off from their unit after losing their commanding officer. Mills tries to get his men back to friendly lines, despite having no information on the current situation, while Lee and Attenborough's characters find themselves taking their private boats across the English Channel to help evacuate the British Expeditionary Force from the port city of Dunkirk.

The 1958 DUNKIRK is very much a British type of World War II film. It's in black & white, it sticks for the most part to the actual facts, and it avoids bold heroics. The three main characters are ordinary men trying to do their best in a difficult situation. Lee's reporter starts out as a gruff, dour fellow who becomes eager to go to Dunkirk, despite the danger involved. Attenborough's mild-mannered, bespectacled married man doesn't want to leave his business or his family--he's recently become a father. It would be easy to define this man as a milquetoast, but the movie doesn't take that obvious route. Attenborough's character rises to the occasion and travels to Dunkirk as well, while still maintaining his quiet demeanor. 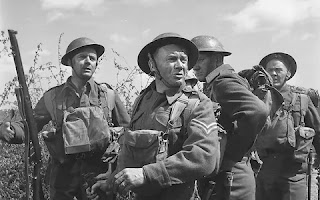 John Mills in the 1958 DUNKIRK


John Mills plays a role that he inhabited several times in his acting career--a regular English bloke serving in the armed forces. It has to be said that Mills was an expert at it. His corporal is at all times believable. He constantly mentions how he never even wanted to be a corporal, yet he deals with the situation as best he can. If this were a Hollywood film, the three main characters would each have a "big" moment, or a scene where they do something incredibly brave. Here the three men are shown as heroes without resorting to overt (and unbelievable) dramatics. The trio are not larger than life warriors--they are representatives of what common English citizens had to go through during the Second World War. All three men wind up together on the Dunkirk beaches during the climax.

The '58 DUNKIRK has plenty of fine English character actors in it, including many who will be familiar to Hammer Films buffs, such as Robert Urquhart, Eddie Byrne, Michael Gwynn, and Phillip Ray. Sharp-eyed viewers may see Lionel Jeffries and Patrick Allen in very small roles. The lack of any major stars makes the film seem more realistic--and it also contributes to the sense that the evacuation of the British Army from France was a collective effort.

Ironically the '58 DUNKIRK, at 135 minutes, is longer than the 2017 version. The movie was filmed entirely in England, though it doesn't show. At times actual war footage is spliced into the scenes, and while this can be disruptive, thankfully it doesn't happen too much. None of the main characters actually arrive at Dunkirk until about 90 minutes into to the film, but the extended sequence of what the men on the beaches had to endure is very effectively handled. The crisp, no-nonsense black & white cinematography was by Paul Beeson. There's no overt gore or bloodshed, but the movie is still able to give one a sense of how dangerous things are.

One thing that struck me was how the '58 DUNKIRK uses--and does not use--sound. The last movie I saw in a theater, the latest Godzilla film, was filled with all sorts of loud sound effects, emphatic music, and characters shouting at each other. DUNKIRK has a very restrained sound mix--Malcolm Arnold's score is only used at very particular moments. The result is that when one does hear  gunshots or bombs in this film, it has more of an impact. It could be said that the entire film has an English manner to it--a look or a glance from a character means more than an explosion. The only sequence that could be called Hollywood-like happens near the end, where a religious service held on the beaches is disrupted by a German bombing run--but it winds up being terse and dramatic instead of emotionally over-the-top.

If you are a World War II buff, and you appreciate well-made and historically accurate movies made about that conflict, I suggest that you view the 1958 DUNKIRK when you get a chance. Instead of being overshadowed by the 2017 DUNKIRK, it should be defined as a fine film in its own right.