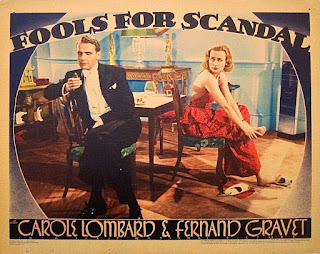 Lombard happens to be my favorite actress of all time, and FOOLS FOR SCANDAL was a film that I had never seen. I own a number of books about Lombard, and every single one of them refers to the film as one of the actress' worst. Even Vincent Paterno's excellent blog dedicated to Lombard, "Carole and Co." (carole-and-co.livejournal.com) has almost nothing positive to say about it.

Having finally seen the film myself, I wouldn't call it unwatchable...but I certainly can say it's not very funny.

Lombard plays movie star Kay Winters, who has taken a quick trip to Paris while making a film in London. While in Paris Kay encounters Rene (Fernand Gravet), a penniless nobleman. The two are attracted to one another, despite not knowing their respective backgrounds. Kay goes back to London, and Rene, having found out who she really is, follows her there and crashes a party she is having. Rene decides to become Kay's personal chef as a way to stay near here, while Kay is afraid of the publicity that might ensue due to such a relationship. The two predictably wind up with each other at the end.

FOOLS FOR SCANDAL can best be described as a movie that attempts to be a comedy. The problem is that it just isn't funny. It lacks some essential ingredients, such as style, wit, and pace. There's plenty of exaggerated acting, and characters wildly rushing about and yelling dialogue, but it takes more than that to make a successful screwball comedy.

The main problem is the script, but having an underwhelming leading man doesn't help much. If you've never heard of Fernand Gravet, don't feel bad--he didn't have much of an American film career. Gravet was a Belgian actor who had starred in European productions, and I assume he was brought over to Hollywood to be another Charles Boyer. Gravet must have shown something to be able to costar with Carole Lombard, but from my viewpoint now I can't figure out what it was. In FOOLS FOR SCANDAL Gravet comes off as silly and annoying. He doesn't have much chemistry with Lombard, and one can't believe that she'd fall for the guy under any circumstances. The script tries to have it both ways with Rene--he's out of money, so supposedly regular folks can identify with him, but he also has a title, which the script suggests makes him a "proper" match for Lombard. To me, he seemed an elitist fellow who didn't want to go out and get a real job.

In fairness to Gravet it has to be said that his character is written quite badly. Rene is one of those romantic leading men who feel that the best way to a lady's heart is to exasperate her as much as possible. Sadly the audience winds up being exasperated as well. There's a long sequence during which Kay and Rene's rival (played by Ralph Bellamy...who else?) are trying to have dinner, and Rene, in his guise as Kay's servant, interrupts them constantly. This sequence is so drawn out that one just wants Rene to get punched in the face by Bellamy, or, better yet, Lombard.

As for Carole, she does the best she can under the circumstances, but even she can't make this tale enjoyable. She makes the lame quips work far better than they should, but she also seems a bit more strident than usual. She does get to wear a very fashionable wardrobe (her character is a famous movie actress, after all), and it doesn't need to be said that she looks fantastic.

I've mentioned that Ralph Bellamy plays another of his "poor sap who is pathetically in love with the leading lady even though he has no chance" roles. Here he's really pathetic, so much so you start to feel sorry for the actor. It's always welcome to see character actor Allen Jenkins, who plays Rene's con-artist buddy, but you find it hard to believe that these two men would actually want to spend time together.

Nearly all of the supposed funny business in the movie falls flat, or feels weird, such as a scene where Lombard and Gravet talk-sing in rhyme (thankfully this doesn't last too long). FOOLS FOR SCANDAL had a unfavorable box-office and critical reaction, and Carole Lombard didn't make another pure comedy for almost three years. One wonders why the usually astute Lombard allowed herself to get involved in such a dud. This was her only acting role for Warner Bros., and one wishes that the studio had paired her with James Cagney as a spunky working-class couple. FOOLS FOR SCANDAL is even more disappointing when one considers that it was produced and directed by Mervyn LeRoy, who had a history of making far better films.

There's plenty of Carole Lombard films that I have not seen, so I hesitate to call FOOLS FOR SCANDAL her worst. But it is quite lackluster. It's the equivalent of being trapped in a room with a bunch of annoying people and watching them trying too hard to be amusing.