SMOKEY AND THE BANDIT II 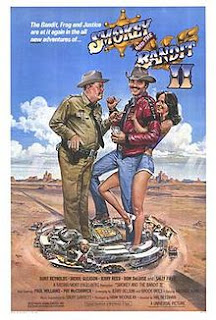 SMOKEY AND THE BANDIT is one of my favorite movies of all time. It made a huge amount of money when it was released in 1977, and despite its low-brow reputation, it is now considered an American classic.

SMOKEY AND THE BANDIT II, on the other hand....

Even as a kid back in the early 80s I knew that SMOKEY AND THE BANDIT II was nowhere near as good as the original. I didn't automatically hate it...back then it didn't make much of an impression on me. Over the years I would see parts of it on occasion shown on TV, but I never went out of my way to see the entire film again.

The other night, I was bored, and going through the list of all the free movies available to me on my Xfinity cable. SMOKEY AND THE BANDIT II was on the list, and I thought, "I've got nothing else going on...why not give it a shot and see how it holds up now??" (Needless to say, I don't live a very exciting life.)

SMOKEY AND THE BANDIT II doesn't come off any better now--as a matter of fact, I may now have to choose it as one of the worst sequels ever.

The original SMOKEY AND THE BANDIT had a lot of dopeyness about it--but there's a difference between dopey and just plain stupid. SMOKEY AND THE BANDIT II starts out with a scene showing Big & Little Enos having cow manure dumped on them from vintage airplanes....and most of the other gags in the film are not much more intelligent.

This sequel has the Bandit (Burt Reynolds) and Snowman (Jerry Reed) attempting to deliver an elephant from Miami to the GOP convention in Dallas. The problem is that the Bandit has become a drunken has-been due to his breakup with Frog (Sally Field). The Snowman convinces Frog to walk out on another wedding to the son of Sheriff Buford T. Justice (Jackie Gleason) so she can help whip the Bandit into shape. The trio learn that the elephant they are transporting is pregnant, and shouldn't be jostled around...but the egotistical Bandit is determined to collect the money on delivering the animal. Hilarity ensues (well....not really.)

A generic description of the plot can in no way present how truly inept the script of this movie is. There's so many problems with this script I don't even know where to begin. Should I start with the fact that the Bandit, one of the most popular movie characters of the 1970s, has been turned into a shallow jerk? Burt Reynolds always had a bit of cocky swagger to him, but he also had the Clark Gable-like ability to play such characters and still make them palatable to the audience. Here the Bandit starts out as a funny drunk, except he's not funny. He then spends the rest of the movie putting a large pregnant animal in danger so he can get some fast cash. He also spends a fair amount of time musing over his downfall. Exactly how are we supposed to enjoy watching this person??

The original SMOKEY AND THE BANDIT was far-fetched...but it the story still fit into the realm of possibility. It could potentially have happened. The sequel is almost as fantastic as a Star Wars story. I'm not expecting documentary-like realism from a Smokey and the Bandit film, but even goofy action comedies have to have some sort of internal logic. SMOKEY AND THE BANDIT II has none.

For example, no one in the film ever considers that putting a large elephant into a semi-trailer without access to food, water, or ventilation for hours upon hours might be a bad idea. Bandit and company shanghai an Italian gynecologist (played by Dom DeLuise with a Chico Marx accent) to take care of the beast, but he doesn't do much for it, other than somehow divine that she's with child.

And there's the stunt-laden climax, which pits the Bandit against dozens and dozens of police cars. The vehicles are courtesy of Buford T. Justice's brothers, who the Sheriff has called for help in apprehending the Bandit. Jackie Gleason plays the brothers--one is named Reggie, and he's a Mountie from Canada (??). The other is a flamboyant fellow named Gaylord (GAYlord....get it??). Apparently the Justice brothers were an excuse to get more of Jackie Gleason on the screen, but it winds up being flat-out weird. How the brothers are able to simply show up in Texas with about a hundred police cars is never explained, and neither is the response of the Snowman--he shows up with about 50 big rigs behind him. The various crashes are well done, but there's no point to them. All of the vehicular mayhem in the first SMOKEY AND THE BANDIT was the result of the main storyline--here, it just seems to happen out of thin air.

The whole point of the first SMOKEY AND THE BANDIT was that the main characters had to accomplish a challenge in a certain amount of time, while avoiding the law along the way. The point of the sequel is a challenge that the viewer doesn't want to see accomplished, because we're supposed to feel sorry for the elephant. Because of this, one isn't really interested in whether the Bandit gets to where he is going on not. And maybe that's a good thing, since Bandit and his friends spend a lot of time meandering around--the story moves at a snail's pace compared to the first Bandit movie.

While the first Bandit film was set in a relatively believable universe, this one goes out of its way to show that it's just a movie. There's four different cameos from country music stars (Brenda Lee, the Statler Brothers, Mel Tillis, and Don Williams), and while they are all on the original soundtrack, they don't contribute much on-screen. There's also cameos from three different NFL players--Terry Bradshaw, Mean Joe Green, and Joe Klecko. Bradshaw's scene is a hoot--the Bandit literally drives up to him while he's practicing for a Steelers-Dolphins game, and asks for his help in avoiding Buford Justice. (Bradshaw reacts as if this is an everyday occurrence.) The kids I went to school with thought it was a big deal that TB was in this movie, but looking at it now it feels like something that you would see in a mediocre TV variety show.

I guess what amazes me most about the script for SMOKEY AND THE BANDIT II is that it got filmed, period. This was a sequel for one of the most successful movies of the 1970s, it was produced by a major studio (Universal), and it featured one of the biggest movie stars of the time. And this was the script they chose to make a movie out of?? They couldn't get anything better than this? (Remember at the end of the first Bandit movie, when Big Enos challenges Bandit to go to Boston to pick up some clam chowder? That would have been a far more interesting tale.)

I can only assume that Universal was so set on another Bandit film that they didn't really care how good or bad the script was. Maybe they figured that Burt Reynolds in a new Smokey and the Bandit movie would make money no matter what. I'm sure in 1980 they were plenty of yes men at Universal, and in Burt's entourage....but I find hard to believe that nobody went out of their way to say how lousy the script was. Somebody had to have said something.

Some movies are so bad they are...well, not good, but at least entertaining. Some movies are so bad they will put you to sleep. SMOKEY AND THE BANDIT II is one of those bad movies that just make you sit there in wonderment. The bad kind of wonderment, as in...."I wonder how the entire cast and crew of this movie actually were able to complete it???"