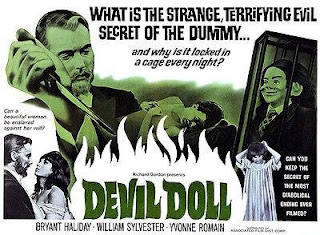 I've seen almost every British horror film from the 1960s.....but DEVIL DOLL (1964) has until recently eluded me. The movie is not to be confused with MGM's 1936 THE DEVIL DOLL directed by Tod Browning. DEVIL DOLL is about a stage hypnotist and ventriloquist called the Great Vorelli (Bryant Haliday) who has a very unique way of giving "life" to his dummy. The story in some ways comes off as a full-scale redoing of the ventriloquist tale in the British chiller classic DEAD OF NIGHT. Both DEVIL DOLL and DEAD OF NIGHT feature a unnerving dummy named Hugo, and in the former film the puppet actually gets up and walks around--a major highlight of the nightmare sequence in the latter film.

I purchased the Image DVD of DEVIL DOLL for a low price, and the disc has two versions of the film--the standard cut and a "continental" edit that has brief bits of nudity.

Set in contemporary times, DEVIL DOLL has reporter Mark English (William Sylvester) trying to write an expose on the Great Vorelli and his fantastic act. Mark convinces his heiress girlfriend Marianne (Yvonne Romain) to allow herself to be hypnotized by Vorelli. The mesmerist becomes obsessed with Marianne, and puts her into a trance. Mark must try to break the spell that forces Marianne to be helpless and bedridden, while at the same time figure out exactly how a simple dummy can walk and talk on his own.

DEVIL DOLL was produced by Richard Gordon and directed by Lindsay Shonteff. The low-budget black & white production has no gore--it's more suspenseful than horrific. Shonteff and cinematographer Gerald Gibbs implement a very quirky visual style that involves several close-ups (too many in my opinion).

The most notable thing about the movie is how adult it is. Vorelli is something of a horndog....at one point he mesmerizes Marianne into visiting his room in the middle of the night (of course the woman is wearing a nightgown.) Vorelli embraces her as the scene discreetly fades away--but it's pretty obvious what happened next. (It's also obvious that this is basically a sexual assault.) Vorelli also favors using buxom female stage assistants and having them dress in scanty showgirl costumes. In the continental version of the film, Vorelli hypnotizes a female volunteer into doing a striptease (the male and female members of the audience find this highly amusing). There's a scene where Mark and Marianne engage in some heavy petting themselves, and it's way more than most leading couples in horror films of this type get to do.

As for the thriller aspects of the tale, Hugo the dummy does gives off a creepy vibe (I'm sure there are as many people who are freaked out by ventriloquist dummies as there are folks who are scared of clowns). Hugo becomes even more disquieting when he gets up and starts walking around (there was an actual person inside the costume during these moments). One complaint I have is that I felt Hugo's voice wasn't strange enough. Hugo's talents are due to Vorelli's ability to transfer souls--but after watching the TWILIGHT ZONE-style twist ending, one realizes that the mesmerist hasn't mastered that task properly.

Bryant Haliday (THE PROJECTED MAN) is very intense as Vorelli, and he makes a very capable menace....but while watching him I couldn't help but think that his role would have been perfect for Christopher Lee. Gorgeous Yvonne Romain (THE CURSE OF THE WEREWOLF) makes one easily understand why Vorelli would set his sights on her (actually the guy is more interested in her money, believe it or not). William Sylvester (GORGO) brings a realistic interpretation to what is usually a thankless role in a horror film. The supporting cast includes such Hammer veterans as Francis de Wolff and Phillip Ray.

There's someone else in the cast I have to mention. He's an actor by the name of Alan Gifford, and, like William Sylvester, he appeared in 2001: A SPACE ODYSSEY....which makes me wonder--did Stanley Kubrick see DEVIL DOLL??

I wouldn't call DEVIL DOLL a fantastic film--it's more like an elongated episode of a 1960s TV anthology show. But it does have a few intriguing moments and an interesting cast, especially if you are familiar with British fantastic films from the 1950s and 60s.