THE KEY is a 1934 drama produced by Warner Bros. and directed by Michael Curtiz. The movie is set in 1920 Dublin, during the Irish "troubles", and it stars William Powell and Colin Clive.

Powell plays British Army officer Captain Bill Tennant, who, at the beginning of the story, has just been assigned to Dublin posting. While inspecting his new lodgings Tennant discovers that his upstairs neighbor is an old army chum, Andrew Kerr (Colin Clive), who now works as an intelligence officer. Tennant also finds out that Kerr's wife, Norah, (Edna Best), is an old flame--something Andrew does not know. Both Tennant and Kerr are on the hunt for a major Irish rebel named Conlan (Donald Crisp). While on a night patrol Kerr tracks down Conlan and apprehends him. Returning home very late, he finds Tennant at his apartment with Norah. Kerr is so crestfallen by this situation he starts to roam about Dublin, not caring that most of the populace would love to get revenge on him for capturing Conlan. Kerr is kidnapped, and the perpetrators declare they will return him when Conlan is released from jail. After finding out that Norah really loves her husband after all, Tennant decides to make a rather large sacrifice to save his old friend.

THE KEY is a rather unusual film for a major Hollywood studio to make in the early 1930s. One would assume that the politically charged backdrop of the story might have scared Warners away from it. The movie takes great pains to avoid taking any type of side between the British and the Irish.

Despite being filmed on studio sets, Michael Curtiz and cinematographer Ernest Haller bring a lot of black & white expressionistic atmosphere to the foggy make-believe Dublin streets. The movie is only 71 minutes long, and it mostly focuses on the love triangle between the characters played by Powell, Clive, and Best.

William Powell is his usually smooth self as Tennant. He gives the Captain plenty of dash and vigor (when he reports to headquarters for his new assignment, he struts into the place like he owns it). One can understand why Norah would still have feelings for him. But Edna Best as Norah doesn't seem like the type of woman the fast-living Tennant might be interested in. Best (who was the female lead in the Hitchcock's 1934 version of THE MAN WHO KNEW TOO MUCH) comes off as prim and proper here, and somewhat fragile.

Colin Clive, with his somewhat dour personality, makes a great opposite to William Powell. Clive's Kerr is resolute and fixated on doing his job. It's a bit of a surprise to see Clive engage in gunfights and chases, but he handles himself well as a man of action. Once he finds out about his wife's past relationship with Tennant, he changes into a disconsolate mope. Despite the two actor's different approaches, Powell and Clive are very good on screen together (they actually come off better together than any one of them do with Edna Best). According to Greg Mank in his fantastic biography of Clive, the character of Kerr was originally supposed to be played by Warren William. In my mind William would have been far too much like Powell. 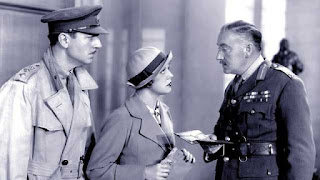 William Powell, Edna Best, and Halliwell Hobbes in THE KEY

The supporting cast is filled with the type of fine character actors one expects to see in a movie made during this time period in Hollywood, such as Donald Crisp, Halliwell Hobbes, and J.M. Kerrigan.

THE KEY is a well-made, decent film, but it is not spectacular. The major part of the story is taken up with the romantic triangle, while the historical situation gets put to the side. The leading players and the director do make it notable, and the short running time prevents it from overstaying its welcome.
Posted by Dan Day, Jr. at 2:53 PM