ONCE UPON A TIME IN HOLLYWOOD


Quentin Tarantino's latest film, ONCE UPON A TIME IN HOLLYWOOD, is a hard movie to review. For one thing, I don't want to reveal the ending for those who haven't seen it--and the climax really deserves its own separate discussion anyway.

There's also the fact that you can't really compare the film with anything else in theaters right now. It's a near-three hour trip through Tarantino's personal flashback fantasy. Set in 1969 Hollywood, the movie is saturated with the music and pop culture of the period. When it does come out on home video, it would help if there is a text commentary which points out and explains all the references.

Tarantino, due to his celebrity filmmaker status, has been allowed to create (note that I didn't say recreate) a time and place that he definitely wants to spend as much time in as possible. The main characters in this film, Leonardo DiCaprio as struggling actor Rick Dalton and Brad Pitt as his stuntman/gopher/best friend Cliff Booth, are the type of guys I think Tarantino would have wanted to have been. A long, long time is spent covering the minutiae of the duo's everyday life, and one can't help but think that Tarantino might have spent even more hours doing nothing but showing the men meandering around Hollywood. DiCaprio and Pitt do have excellent chemistry together. 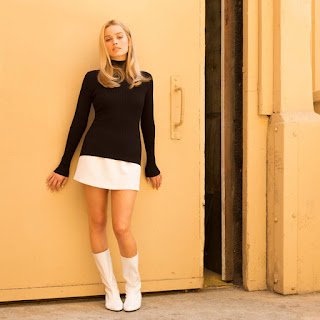 
Rick and Cliff's misadventures alternate with the activities of Sharon Tate (Margot Robbie), who just so happens to be Rick's neighbor. While Rick and Cliff are figments of Tarantino's imagination, Sharon Tate most certainly did exist. Here, she's not so much a character as she is a mini-skirted symbol of late 60s free-spirited glamour. Sharon's ultimate real-life fate hangs over the entire movie, and gives it an underlying tension.

How Tarantino resolves to deal with that fate has already spawned much internet discussion. It is up to the individual viewer to decide whether the director is honoring the late actress or trivializing her demise.

I liked ONCE UPON A TIME IN HOLLYWOOD, but one has to realize that I am a person that would much rather watch a movie or TV show from 1969 than those made in 2019. I'm also the type of person that will get references to people like Andrew V. McLaglen and Antonio Margheriti, and appreciate "appearances" in the film by Bruce Lee and Steve McQueen. For those who have very little knowledge of 1960s American entertainment, the movie may be a confusing drag.

One thing I do have to give Tarantino credit for--he's put himself into a position where he can tell the stories he wants to tell, exactly the way he wants to tell them. You may not like the man, or his movies--but in the end he makes the films he wants to make, regardless of mainstream tastes.