WAR AND PEACE On Blu-ray From Criterion 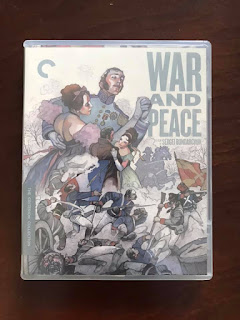 I had read about the 1960s Russian film version of WAR AND PEACE a number of times. I had read that the entire project may have been the most expensive cinematic production ever, how it may have used the largest number of extras ever, and that in total it was a mind-boggling seven hours long.

Thanks to Criterion's recent release of the entire uncut version on Blu-ray, I have now had the opportunity to actually watch WAR AND PEACE....and it certainly lives up to its legend.

Director/co-writer/star Sergei Bondarchuk had the backing of the Soviet government, and enough time and resources available to make a dozen movies. He certainly put it all on the screen. There is so much to see and experience here that it's almost impossible to properly appreciate it with just one viewing. The sets, the locations, the costumes, the number of people involved--at times watching what is going on can be so overwhelming that one just wants to pause at a certain scene and soak it all in.

And the battle scenes! I've always maintained that the greatest battle sequence I've ever seen in any movie was from WATERLOO--a film directed by Sergei Bondarchuk. But WAR AND PEACE tops that with two major conflicts: the Battle of Austerlitz and the Battle of Borodino. Both sequences are jaw-dropping--it really does look and feel like thousands of soldiers are trying to slaughter one another. Bondarchuk doesn't try to have any of the characters "explain" the battles, and he doesn't go out of his way to make the audience understand the tactics behind each one. He puts the viewer right in the middle of the action and never lets up. The camera soars to the sky, or skims across the ground....and there's no annoying 21st Century editing techniques to interfere with what we are seeing.

Another major epic sequence is the burning of Moscow, where one gets the impression that hell has literally broken out upon the earth. With these type of set-pieces one would expect that individual characters might get lost among all the fury--but they don't, because we share their experiences and their reactions. Bondarchuk's ability to shift between the epic and the intimate is comparable to that of Sergio Leone. Just like Leone, Bondarchuk knows how and when to use close-ups and when to stay on a shot, and he knows when--and when not to--use sound.

The first chapter of WAR AND PEACE is called ANDREI BOLKONSKY, and it sets up the situation and introduces the main characters. Sergei Bondarchuk plays Pierre Bezukhov as something of a misfit, a man who is ill-at-ease no matter what situation he finds himself in. Bondarchuk, for me, had a middle-aged character actor type of vibe. Vyacheslav Tikhonov plays Andrei Bolkonsky, an aristocratic Russian military officer. I though Tikhonov resembled Christopher Plummer in looks and manner. Ludmila Savelyeva plays the pixie-like Natasha Rostova, who entrances both Bezukhov and Bolkonsky. Apparently one of the reasons for Savelyeva's casting was due to her Audrey Hepburn type of qualities (Hepburn had played Natasha in a 1956 film version of the story). You can't help but be reminded of Hepburn when watching Savelyeva.

ANDREI BOLKONSKY ends with the Battle of Austerlitz, in which Bolkonsky is injured. The next chapter, NATASHA ROSTOVA, deals with Natasha's and Bolkonsky's romance. This leads to THE YEAR 1812, which is almost totally taken up with the Battle of Borodino. The final chapter is called PIERRE BEZUKHOV, and it deals with that character's travails through the occupation and burning of Moscow and being held prisoner by the French during their retreat from Russia.

I watched the four chapters of WAR AND PEACE on four different nights. I would recommend doing it this way simply because there is so much to take in, even in just one chapter. I was blown away by the overall affair, but I must admit that I will be able to appreciate it better with multiple viewings. This is a seven hour expansive widescreen historical epic, and seeing it just once seems to me a bit of a waste. Having a official Region A version of it on home video now allows a person to take the time to study it and get the most enjoyment out of it.

What impressed me most about WAR AND PEACE is that it didn't seem like the typical big-budget movie epic. WAR AND PEACE, for me, had a reality to it, due to the Russian locations, the authentic costumes, the stupendous battle sequences, and the fact that I had never seen any of the actors before. Because I had no prior knowledge of any of the cast, I didn't see them as performers--I saw them as the actual characters. I have the 1956 WAR AND PEACE on DVD, and that has big stars like Audrey Hepburn and Henry Fonda--and no matter what, you're not going to see them as Russian aristocrats...you're going to see them as Hepburn and Fonda.

Criterion's Blu-ray release of WAR AND PEACE has two discs, with two chapters of the film on each. The films are presented in 2.35:1 anamorphic widescreen, with a very lively 5.1 DTS-HD mix of the original Russian soundtrack with English subtitles. There is no English dub track (for those who don't like subtitles, you're going to have to put up with seven hours of them).

The overall visual quality is impressive (the packaging says that this is a new 2K digital restoration). There is, however, some distortion at times in the dark areas of certain scenes.

As usual with Criterion, there's a number of extras, such as a few vintage featurettes about the making of the film from the 1960s, and new short interviews with chief cinematographer Anatoly Petritsky and Sergei Bondarchuk's son. There's also a talk with historian Denise J. Youngblood about the film.

Inside the disc cover is a fold-out poster of the case artwork which has on the back an essay by critic Ella Taylor.

I'm now at the time of my life where I wonder how many more major movie moments I'm going to experience. I'm talking about moments that enchant and amaze you, moments that make you remember a certain film for the rest of your life. Watching WAR AND PEACE for the very first time was one of those moments (I only wish I had been able to see it on an actual theater screen). It is an incredible production all the way around. It may have been backed by the Soviet Union, but it didn't seem very political, at least to me. WAR AND PEACE is truly the ultimate vast grand historical romantic cinema epic.