DEAD OF NIGHT On Blu-ray From Kino 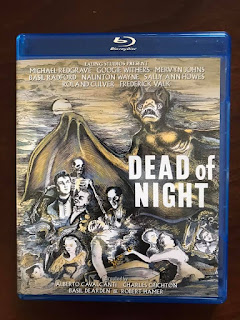 The 1945 British film DEAD OF NIGHT is the granddaddy of all modern horror anthology films. The five tales presented in it have influenced numerous other movies and television episodes. The influence of DEAD OF NIGHT has been so pervasive that those now who see it for the first time may feel that it's overly familiar. Kino has just released the movie on Region A Blu-ray.

DEAD OF NIGHT is compared to similar horror movies made later on, but it should stand on its on. It was made by the famed Ealing Studios, and those who worked on the film--in front of and behind the camera--were among the best talent in the British film industry at that time. The film was definitely designed as a chiller, but it has more of a mainstream feel to it than the typical horror movie product.

All five of the stories in the film still hold up well today, even the humorous segment involving a couple of golfing buddies. The final segment, which stars Michael Redgrave as a tormented ventriloquist, remains the best, and it leads to a shattering conclusion (if the end of the movie can properly be called a conclusion).

A long time ago I owned a very cheap VHS copy of DEAD OF NIGHT that featured a very bad print of the film. Whenever I have seen it on TV, it has never looked or sounded very well. The disc cover for Kino's Blu-ray says that this is a new restoration in 4K from original archival materials. I would say that this print is quite good, but there are visible scratches from time to time. Certain parts of the movie look sharper than others. The sound quality is mediocre--at times music and dialogue seem distorted and muffled. If you are not used to listening to English accents, you may find it difficult to understand what the characters are saying at points.

Included on the disc is a 75 minute program featuring a number of talking heads who thoroughly discuss all aspects of the production of DEAD OF NIGHT. Among those taking part are Kim Newman and John Landis. The overall discussion is very insightful and wide ranging, and it is well worth watching. The discussion carries no type of credits whatsoever, but it appears to have been put together recently. Tim Lucas also contributes another of his excellent commentaries.

The sound quality on this disc of DEAD OF NIGHT is not perfect, but Kino should be commended for putting out a decent version of this movie.