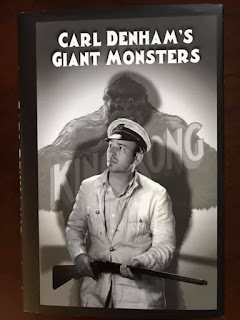 Frank Dello Stritto's CARL DENHAM'S GIANT MONSTERS is a follow up to his magnificent book A WEREWOLF REMEMBERS: THE TESTAMENT OF LAWRENCE STEWART TALBOT. Both volumes are "biographies" of famous fantastic film characters.

CARL DENHAM'S GIANT MONSTERS covers the life of the man who captured King Kong from Skull Island in 1933, as depicted in the famed RKO film released that year. Denham was played by Robert Armstrong in the film and its sequel, THE SON OF KONG. But according to the author, Denham had all sorts of amazing adventures before and after his encounter with Kong.

Dello Stritto offers the premise that while he was working for an oil company in the Far East, he and his wife encountered Carl Denham on a small island in Indonesia during the 1970s. Denham was still hiding out from people who blamed him for the death and destruction wrought by Kong after the giant ape's rampage in New York City. Denham became friends with the couple and proceeded to tell them about his extraordinary encounters.

Like his volume on Larry Talbot, Dello Stritto uses numerous characters and incidents from various 20th Century horror and science fiction films to flesh out Denham's story. Some of Denham's acquaintances are pop culture icons, while others might require a trip to the IMDB to figure out who they are. No matter who Denham winds up meeting during his story, the circumstances behind it all are endlessly inventive and creative, due to the author's cunning imagination.

This book reveals that as a young man, Denham was involved with Theodore Roosevelt's exploration of the Amazon River in the mid-1910s. Denham would return to the area a decade later as part of the Professor Challenger expedition depicted in the silent classic THE LOST WORLD. Denham's thirst for adventure would never fully be quenched, even after the disastrous results of his bringing King Kong to America. He would accompany many other well-known movie explorers, and be quizzed by any number of cinematic scientists, mad or otherwise.

Dello Stritto references such disparate films as MR. DEEDS GOES TO TOWN, the 1941 THE MALTESE FALCON, and KONGA. He also slips in some rather clever links to the 1976 and 2005 versions of KING KONG. But this book is more than just a collection of fanboy in-jokes. The author goes out of his way to make Denham's story seem as if it really happened. He portrays the older Denham as a man who, at times, still has some of his old bravado--but he also is haunted and humbled by his actions during the Kong affair. (While reading this book, I couldn't help but hear Robert Armstrong's voice when Denham speaks.)

CARL DENHAM'S GIANT MONSTERS is published by Cult Movie Press, and, at 500 pages long, you certainly get your money's worth. The book has a clean and concise design by Tom Jackson, and it is filled with many movie stills which represent the numerous personages Denham comes into contact with. The reader even gets a map illustrating King Kong's travels in New York City!

Most film buffs will definitely love CARL DENHAM'S GIANT MONSTERS. The premise is fascinating, and Dello Stritto does a masterful job in connecting all the dots and bringing back memories of dozens of fantastic films. Frank should have won a Rondo Award for A WEREWOLF REMEMBERS...and he better win one for CARL DENHAM'S GIANT MONSTERS.
Posted by Dan Day, Jr. at 1:24 PM