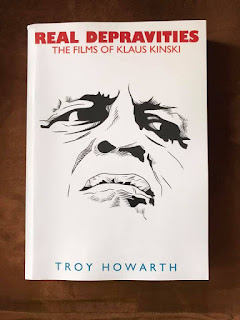 If there was any actor that truly fit the definition of "cult movie star", it was Klaus Kinski. Whether it was his looks, his temperament, his lifestyle, or his professional choices, there was nothing mainstream about him. The man  made several appearances in German Krimis, Spaghetti Westerns, and low-low budget sci-fi flicks. He also had a long and tumultuous personal and professional relationship with director Werner Herzog, which enabled Kinski to give extraordinary, world-renowned performances in such films as AGUIRRE, THE WRATH OF GOD and NOSFERATU THE VAMPYRE. Kinski's immense acting talent was matched by his ability to cause controversy at every point in his life. Troy Howarth ably covers all of this in his book REAL DEPRAVITIES--THE FILMS OF KLAUS KINSKI, published by Wildside/Kronos Books. (This review pertains to the standard edition of the volume.)

The first great impression Kinski made upon me as an actor was his role in David Lean's film version of DOCTOR ZHIVAGO, which ironically may have been the most mainstream production he ever appeared in. Kinski has a very, very small part, and very little screen time, as a anarchist being sent to a labor camp during the chaos of the Russian Revolution--but even while chained to a cot in a overcrowded train car, he totally dominates the scene. His anger, sadness, and fury at his situation are there for all to see--it's as if the suffering of the entire Russian population is etched on his face. When Kinski proclaims "I am the only free man on this train!!!" you know exactly what he means, and you never forget him for the rest of the film.

Howarth pays tribute to Kinski's unique and eclectic abilities with this fine book. Just watching most of these films must have been a chore--many of them are incredibly obscure. The author covers all of them, and while he is obviously a fan of his subject, he's not afraid to be critical of the movies, or the actor. Kinski often took part in a mediocre project just for a quick paycheck, and at times his performances would suffer as a result. Howarth does not hesitate to point this out.

Every film Kinski appeared in is covered, along with credit & plot information, and the actor's role in the production. Howarth also examines Kinski's television appearances, certain movies he had a chance to appear in, and documentaries which concern the actor. A small biography of Kinski is provided. Stories about the man's notorious personal life are legion, but Howarth avoids taking the easy route and wallowing in tabloid gossip. The author only comments on Kinski's off-screen eccentricities when it directly concerns a particular film under discussion.

The book is illustrated with several black & white movie stills and photos of Kinski. The volume is over 500 pages, and you more than get your money's worth. Howarth presents cogent analysis of Kinski's films and career, while also making the book an entertaining and informative read.

REAL DEPRAVITIES--THE FILMS OF KLAUS KINSKI is a thorough examination of the movie career of a rather unique performer.
Posted by Dan Day, Jr. at 11:28 AM