DJANGO THE BASTARD On Blu-ray From Synapse 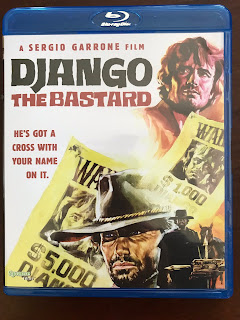 Sergio Corbucci's DJANGO (1966) became one of the most renowned Spaghetti Western films, and it inspired a slew of imitators. One of those productions has been released on Blu-ray by Synapse Films.

DJANGO THE BASTARD was made in 1969, but according to Euro Cult movie expert Troy Howarth, it was not released in the U.S. until 1974, when it was distributed by none other than drive-in movie maven Herman Cohen. The Italian production was known in the U.S. as THE STRANGERS GUNDOWN, and that is the title it goes by on the print used for this Blu-ray. Synapse must have felt that DJANGO THE BASTARD would be a more eye-catching title on a disc cover, and it certainly does get your attention.

Euro Western veteran Anthony Steffen plays Django. Is the character the Django?? Probably not, but he's a Django, and that's good enough for this movie. Like most other film characters that use the moniker, this Django is silent, stern, and mysterious. Django is introduced in this tale by ambling into a bleak Western town and planting a cross with an intended adversary's name on it right in the middle of the street. Django is out for revenge against the town boss, one Major Murdok (Paolo Gozlino). The reason for Django's vendetta is eventually revealed in one of the most common Spaghetti Western devices, the stylized flashback.

What makes DJANGO THE BASTARD intriguing is that the story is a bit ambiguous on whether the main character is actually a living human being or some sort of a spirit. The black-garbed Django is a truly implacable foe, due to the fact that he has the apparent ability to appear and disappear at will. He also dispatches his enemies with ruthless efficiency, due to his almost superhuman skills with a gun. The fellow does bleed...but even by the end of the film one isn't really sure what he may be. Clint Eastwood's HIGH PLAINS DRIFTER certainly comes to mind while watching this.

Anthony Steffen does bring a determined presence to the title role, although honestly he doesn't have to do much as an actor. With his dark outfit and scruffy facial hair he does bear a tad bit of a resemblance to Franco Nero's original Django, but he does not drag a coffin behind him.

Paolo Gozlino seems way too normal and low-key to be a Spaghetti Western main villain. The outlandish aspects one expects to be found in that role are given to Luciano Rossi as Murdok's mentally deranged younger brother. Rossi has a definite Klaus Kinski vibe to him, and one has to wonder if the part was written with Kinski in mind. The only major female role in the movie is played by Rada Rassimov, who is the wife of Rossi's character...it's explained that she was "hired" to marry him. The relationship between the couple is an interesting one, especially since one never knows how loyal Rassimov is to the Murdoks (she also makes a play for Django).

DJANGO THE BASTARD was directed by a man named Sergio...but it wasn't Leone, Corbucci, or even Sollima. It was Sergio Garrone, who also co-wrote the movie with Anthony Steffen. Garrone and his cinematographer Gino Santini do provide some striking and atmospheric widescreen compositions.

According to the disc cover, this Blu-ray presents a all-new 2K scan of the English language version of the film from an original 35mm element. The print is in 2.40:1 widescreen and looks very good--the color is not very vibrant but I don't think it was supposed to be. There is only a English dub soundtrack. The disc is listed as playable for Region A, B, and C.

The only extra is an audio commentary with Euro Cult movie expert Troy Howarth. His talk is lively and enthusiastic. He gives relevant info on the film and he also provides his take on certain aspects of the Euro Western genre in general.

I wouldn't call DJANGO THE BASTARD  a great Spaghetti Western, but it was better than I thought it would be. It is rated PG and it is surprisingly free of blood and gore--usually the more obscure Euro Westerns go overboard on the violence and exploitative elements so as to attract attention. I had never heard of the film before, and I believe it turned out to be a worthy purchase.