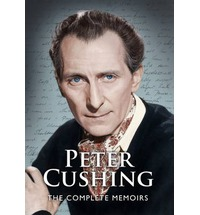 ANOTHER Peter Cushing book?? Well, why not? Would you rather read about the Kardashians or the Duck People?

PETER CUSHING: THE COMPLETE MEMOIRS is actually a special edition of Cushing's two volumes of autobiography, written in the 1980s. The books (PETER CUSHING: AN AUTOBIOGRAPHY and PETER CUSHING: PAST FORGETTING) were originally published by Weidenfield & Nicolson in the late 1980s, and there was later a combined edition released by Midnight Marquee Press in 1999.

Most Peter Cushing fans more than likely own one of these earlier versions (I own the Midnight Marquee book), so why buy this? Well, the new version is in hardcover, it has a very nice design (it is published by Signum Books, and edited by Marcus Hearn), and it has a number of great photos. There's also a an introduction by British horror film historian Jonathan Rigby, who gives a personal perspective on Cushing's career, and a foreword from Joyce Broughton, who was Cushing's secretary.

This volume also includes an article called "The Peter Cushing Story", which was prepared in 1954 and revised in 1955. This is somewhat of an earlier version of Cushing's autobiography--but some of his recollections are a bit different than what he recalled later on.

The best thing about reading Peter Cushing's memoirs is that it gives you a true personal reflection of the man. Cushing's work is not written in a typical linear sense--it's more of a series of incidents in his life that he felt was important to relate. Because of Cushing's unique writing style the reader gets the feeling that they are sitting in a room with the author and listening to a conversation. Cushing's slightly off-beat way of discussing his life and acting career tells you more about him than a dry recitation of information would.

If you want all the facts concerning Peter Cushing's film career at Hammer and Amicus, there are many, many other books to choose from. These memoirs are not about someone who made a bunch of monster movies--they are about a kindly and artistic British gentleman. That's the charm and the true value of PETER CUSHING: THE COMPLETE MEMOIRS.