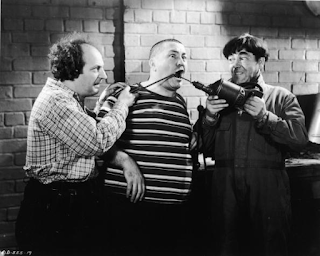 I haven't done a favorite list in a while, so this post concerns my personal best Three Stooges shorts.
A know a lot of poeple would say, "If you've seen one Three Stooges short, you've seen 'em all." Actually there's a lot more diversity in the Stooges' catalog than one would expect. The Stooges' Golden Era was from about 1937 to 1944. This period featured the Stooges (and the Columbia shorts department) at the top of their game. A successful formula had been developed for the Stooges, and it worked very well until Curly's health started to worsen around 1945. The arrival of Shemp kind of reinvigorated the series for a while, but once Jules White took total control of the shorts (and started re-using every piece of old Stooges footage he could get his hands on), the films became pretty mediocre. However, not all the shorts on my list contain Curly.....and there's plenty to rediscover if one takes a good look at the Shemp period.

The shorts are listed in order of preference.

1. A PLUMBING WE WILL GO (1940) Directed by Del Lord
My all-time favorite Stooges entry. It has all the classic elements--the Stooges are on the run from the police; they attempt to do a job involving household work; and they are involved with snooty society types. If you ever meet someone who has no idea who the Stooges are (if such a person exists), and you want to explain the Stooges to them, this is the short you should have them watch.

2. PUNCH DRUNKS (1934) Directed by Lou Breslow
Fight promoter Moe finds out that Curly goes crazy when Larry plays "Pop Goes the Weasel". This is the second Columbia Stooges short ever made. The first, WOMAN HATERS, was more of a musical comedy, so PUNCH DRUNKS is the true beginning of the "real" Stooges. The scenario of this short was developed by Moe, Larry, and Curly, and it sets the template for the rest of the Stooges' careers. The Stooges' individual personalities, and the formula their adventures would follow, were established in PUNCH DRUNKS. Because of this, PUNCH DRUNKS may be the most important Stooges film.

3. AN ACHE IN EVERY STAKE (1941) Directed by Del Lord
The Stooges start out as icemen dealing with a very long flight of stairs, and then wind up being party caterers. A takeoff on Laurel & Hardy's THE MUSIC BOX. Features the Stooges' number one foil, Vernon Dent. "Hey Curly, go shave some ice!"

4. THE SITTER DOWNERS (1937) Directed by Del Lord
The Stooges are not allowed to marry their girlfriends, so they stage a sit down strike, which nets them nationwide publicity. It also gets them a free house--but they have to build it themselves. A perfect situation for a great Stooges comedy.

5. YOU NAZTY SPY! (1940) Directed by Jules White
The Stooges take a satirical look at the Axis Powers--over a year before American entered WWII. Jules White's "anything goes" style of direction works best in a situation like this.

6. BRIDELESS GROOM (1947) Directed by Edward Bernds
Without doubt the best short of the Shemp era. Shemp can inherit a fortune if he gets married. The problem...it's Shemp. A number of highlights here, including: Moe and Shemp being stuck in a phone booth; Shemp nearly getting slapped to death by frequent Stooge leading lady Christine McIntyre; and the wedding climax, featuring Emil Sitka as a jittery Justice ("HOLD HANDS, YOU LOVE BIRDS!!").

7. VIOLENT IS THE WORD FOR CURLY (1938) Directed by Charley Chase
The story opens with the Stooges working at a service station, and leads on to the Stooges as professors at an all girls college. Features the Stooges' legendary performance of the song "Swinging the Alphabet".

8. THREE PESTS IN A MESS (1945) Directed by Del Lord
The majority of this short deals with the boys' attempt to bury a "dead body" (actually it's a mannequin) in a pet cemetery. Probably the best of their many "scare" comedies.

9. DIZZY PILOTS (1943) Directed by Jules White
The Stooges (as the Wrong Brothers) try to build their own plane for the war effort. Highlights: Moe being covered in rubber and floating away like a balloon; and the Stooges' test flight.

10. GOOF ON THE ROOF (1953) Directed by Jules White
The Stooges decide to do their friend Bill a favor by cleaning his house and installing a TV set before Bill comes home from his honeymoon. Some favor. Nothing really out of the ordinary here....just 17 minutes of pure slapstick. I loved watching this one as a kid.