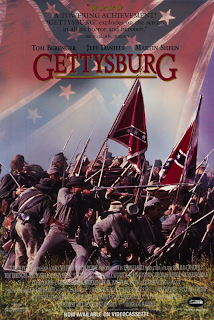 Next week will mark the 150th anniversary of the Battle of Gettysburg. The combined forces of the Confederate and Union armies numbered over 150,000 men, and they participated in the largest battle ever fought on the Western Hemisphere. The battle has been mentioned in various films over the years but the only real serious full-length dramatization of it is 1993's GETTYSBURG, produced by Turner Pictures and written & directed by Ronald F. Maxwell.

The special Blu-ray Director's Cut of GETTYSBURG has a running time of 4 and a half hours. Some might think that a bit excessive, but Ronald Maxwell has to be given credit for taking the time to properly interpret the many factors and situations involved with such a complex event. The real-life battle took place over three different days, and each day had it's own stories and highlights. Maxwell did his utmost to explain to the audience all the military strategies in a dramatic and interesting manner. This is something that is not easy to do in a historical film--there's always a danger of the scenes becoming nothing more than a history lesson.

Maxwell's script was based on Michael Shaara's novel The Killer Angels (which this blogger has not read). Thankfully GETTYSBURG is relatively free of the usual "Hollywood" moments--for example, there isn't any tacked-on romantic subplot....because there isn't any major (or even minor) female roles! I'm certainly no Civil War expert, but it appears the movie is historically accurate. The production made use of thousands of Civil War re-enactors, which gives the film a sense of verisimilitude that it would not have if just ordinary extras were used.

Greatly helping the historical feel is the fact that several scenes were filmed in Gettysburg National Military Park, the site of the actual battlefield. The production design and the costuming are top-notch. And the battle scenes--particularly the defense of Little Round Top and Pickett's Charge--are some of the most spectacular ever recorded on film.

It's obvious that Maxwell tried very hard to make things "even" between the presentation of the Blue and the Grey. There still seems to be a lot more attention paid to the Confederate officers than those of the Union. The commander of the Union forces during the battle, General George Meade, only gets one scene...and if you aren't paying very close attention you might miss him. When it comes to Civil War scholarship, the Rebel side almost always gets the most coverage. After all, it's the Confederacy that had all the "colorful" officers--men like Lee, Longstreet, Hill, Stonewall Jackson, J.E.B. Stuart, Nathan Bedford Forrest, etc. Most Union officers are almost always portrayed as either bunglers or butchers. Some critics have accused Maxwell of favoring, or being sympathetic, to the Southern cause. (Maxwell would get a lot more criticism over his other Civil War epic, GODS AND GENERALS). I honestly don't think Maxwell was favoring one side or the other; but I do think he was doing what several others have done when presenting the Civil War...that is, paying more attention to the most "colorful" side, the South.

There is a huge amount of acting talent in this film, including: Tom Berenger, Jeff Daniels, Sam Elliott, Stephen Lang, and many other character actors who you may not know the names of, but whose faces are familiar. For my money the performer who steals the show is Richard Jordan as Confederate Brigadier General Lewis Armistead. He's the one you remember after the movie is over.

When it comes to historical films, it's not enough to pick just a great actor....one must pick the right type of actor. There are certain actors who would never look right in a period piece. Nearly all of the cast of GETTYSBURG look as if they belong in the Civil War era. There is, in my opinion, a big exception...and that is Martin Sheen as Robert E. Lee. I've seen GETTYSBURG a number of times, and I still think that Sheen was mis-cast. It's not enough to hurt the story, but I just can't believe in Sheen as Lee. Robert Duvall played Lee in Maxwell's GODS AND GENERALS, and it's too bad he didn't play Lee in GETTYSBURG.

One of the things I love about movies is that they enable the viewer to experience a time and place that one would never have the chance to. The historical epic is the ultimate example of this. I'm a huge fan of the so-called "war film", and it's not because I like watching people get killed or that I want to see a bunch of explosions. History is more than just a bunch of facts & figures, it's pure human drama. When done the proper way, like GETTYSBURG, it can allow you to understand and appreciate America's past and what this country, and it's people, have really gone through.