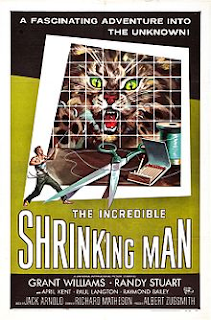 Another gifted talent has passed. American writer Richard Matheson was best known for his tales of the fantastic. He wrote several episodes of "The Twilight Zone", and wrote the scripts for three of the most famous TV movies of all time: DUEL (directed by Steven Spielberg), THE NIGHT STALKER, and TRILOGY OF TERROR.

But Matheson was also the screenwriter for some of the most famous horror and science-fiction films ever made. Even a partial list is impressive:

Matheson's most famous work was the novel I Am Legend. It has been made into a feature film three different times....so far (THE LAST MAN ON THE EARTH, THE OMEGA MAN, and I AM LEGEND). The book has been ripped off countless other times. Even though the novel deals with vampires, the entire zombie craze which has taken over the entertainment industry owes a lot to Richard Matheson's story. What made I Am Legend stand out is that it was set in 20th Century America, and not in a distant time or a distant country. The book is one of the greatest horror stories of all time....and the movies have never gotten it right.