FORGOTTEN HORRORS VOL. 6: UP FROM THE DEPTHS 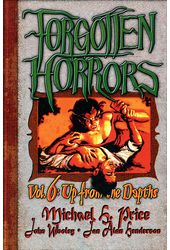 The authors' purpose in starting the series was to cover not just little known or low budget classic horror movies--it was to also examine certain lesser-known films which had thriller or Gothic elements, even though the films themselves were not classified as such. Because of this, the FH series is filled with entries concerning crime thrillers, film noirs, B-Westerns, various melodramas, and even some slapstick comedies.

The inclusion of such material is what makes the FORGOTTEN HORRORS books stand out. The earlier volumes were well worth reading, simply because they gave even the most hard-core film buff an introduction to movies they might never have taken a moment's notice of.

Volume 6 carries on this tradition, although it's pretty hard to call some of the movies covered "forgotten". Making an appearance in Vol. 6 are famous genre films such as INVASION OF THE BODY SNATCHERS, IT CAME FROM BENEATH THE SEA, NOT OF THIS EARTH, and PLAN 9 FROM OUTER SPACE. There are still a lot of obscure titles in Vol. 6....but because of the explosion of information on the internet, and various facebook pages and goofy movie bloggers, just about every movie ever made now has someone giving a thorough critique on it.

Vol. 6 is still worth getting. Michael Price (and co-authors John Wooley and Jan Alan Henderson) have a unique and entertaining way of looking at even the most well-known films. No matter how much Monster Movie information you know, Price & Co. always seem to unearth some new nugget of knowledge. A lot of the movies here have been covered to death in various other books & magazines, and I was wondering whether Vol. 6 would be more of the "same old stuff"....but it isn't.

Accompanying the numerous movie entries are an interview with Fifties Sci-Fi leading man Jeff Corey; a great article on FX artists Paul and Jackie Blaisdell; a remembrance of John Agar; and a discussion of Hammer Films. The book ends with a mini-history of forgotten horror comics.

If you have any of the other FORGOTTEN HORRORS volumes you'll certainly want to get this one. The first four books in the series were published by Midnight Marquee Press. Volume 5 and the latest entry come from Cremo Studios, and unfortunately they are more expensive than the Midnight Marquee books. If you are a major film buff with a taste for unusual fare, this is a must-have....but the casual film fan may not want to pay the price to read about movies they've never heard of.