Book Review: FIREBALL--CAROLE LOMBARD AND THE MYSTERY OF FLIGHT 3 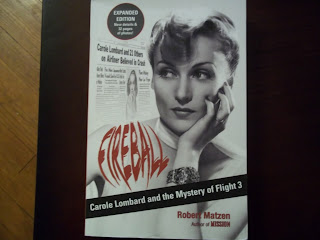 This month marks the 75th anniversary of the death of Carole Lombard. The actress and 21 other people (including her mother) died when the TWA DC-3 airliner they were traveling on slammed into Mt. Potosi, a peak located some thirty miles southwest of Las Vegas, Nevada. Author Robert Matzen examines this tragic incident in the new paperback edition of his book FIREBALL--CAROLE LOMBARD AND THE MYSTERY OF FLIGHT 3.

Carole Lombard is my favorite actress of all time, so obviously my thinking will be biased when it comes to a book like this. But putting that aside, Matzen has done a fantastic job. The author has done an incredible amount of research, covering all aspects concerning the flight, and the futile attempts by ordinary local citizens to climb the treacherous Mt. Potosi in the hopes that someone might have survived the crash. Matzen himself climbed the mountain, and he makes very clear how difficult it was for the rescue team, and for those who had the unfortunate task of recovering the bodies. Matzen reveals that pieces of the DC-3 still rest on the mountain today, and human remains are still being found.

Matzen's writing style is easy to read and to the point, and the chapters are short and brisk. The chapters alternate between detailing Lombard's life and the crash and its aftermath. The result is a riveting story--once you being reading, you don't want to put it down. Matzen presents Carole Lombard as a whirlwind of energy, a woman determined to succeed and overcome any obstacles in her way. Matzen shows that the relationship between Lombard and Clark Gable was far more complicated than the fairy tale love story than most film buffs assume it was. Lombard's death literally made Gable a changed man--just watch any of the movies he appeared in after WWII and you will see that the vitality and charisma he showed in the 1930s is all but gone.

This book isn't just about Carole Lombard. Matzen makes the reader understand that 21 other souls perished on the DC-3 plane, and many of them were Army Air Corps fliers who would most certainly have contributed to the war effort. Lombard herself was doing her part for America by participating in a war bond rally in her native state of Indiana, when she decided to fly back home to California instead of taking the train. The flight seemed cursed from the beginning--there were multiple delays and unscheduled stops, and at one point civilians were told that they must give up their seats for Army personnel. Lombard went out of her way to demand that she, her mother, and MGM press agent (and Gable best friend) Otto Winkler be allowed to remain--a very un-Lombard like thing to do. Matzen details the circumstances behind all of this, and the reasons for Lombard's behavior.

FIREBALL features a 32-page photo section, which includes pictures of Lombard on the war bond tour, and images of the crash scene.

FIREBALL is one of the best books I have read in recent years (it does help that it is about a subject I have a particular interest in). You don't have to be an expert in classic Hollywood, or aviation, to appreciate reading it. Like most deaths of famous individuals, the plane crash that took the life of Carole Lombard has now been linked to various legends and tabloid tales. Robert Matzen has done a service for film buffs everywhere by writing a thorough and factual account of this famous tragedy. If you want to really learn about the end of Carole Lombard's life, you must read this book.
Posted by Dan Day, Jr. at 9:22 AM