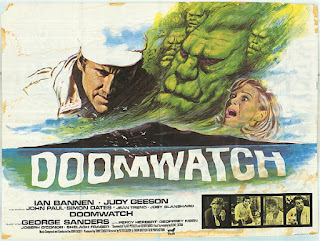 Kino Lorber continues to mine the vein of off-beat cinema with one of their latest releases under the Kino Studio Classics label, DOOMWATCH (1972).

DOOMWATCH has all sorts of geek connections to it. The film's director was Peter Sasdy, who helmed many of Hammer's better later outings, including TASTE THE BLOOD OF DRACULA and HANDS OF THE RIPPER. Among the cast are such familiar Hammer faces as Percy Herbert and George Woodbridge. Shelagh Fraser, who played Aunt Beru in STAR WARS, has a prominent role as the proprietor of the village pub (no, she doesn't serve up any blue milk). The legendary George Sanders has a small role, and the female lead is played by Judy Geeson, who has worked with the likes of Joan Crawford, John Wayne, Peter Cushing, Christopher Lee, and Rob Zombie.

DOOMWATCH is based on a early 1970s British TV show (which I know absolutely nothing about). The title refers to a British government organization formed to stop and prevent pollution. A member of Doomwatch, Dr. Shaw (Ian Bannen) is sent to a small Scottish island which has been victimized by an oil spill. Shaw finds the entire village is hostile to him, and learns of strange occurrences that have been happening. Shaw convinces the village schoolteacher (Judy Geeson) to help in his investigations. Eventually the doctor, with the help of his Doomwatch comrades, discovers that a combination of radioactive waste and corporate malfeasance have ruined the village forever.

At first glance it would seem that DOOMWATCH is a typical low-budget British horror film of the period (it was produced by Tigon, a company that was a rival to Hammer and Amicus). The creepy, isolated village, the suspicious--and suspicious looking--villagers, bodies buried in shallow graves, strange folk shuttered up in darkened rooms...all these elements are well known to any viewer who has seen plenty of classic creature features. DOOMWATCH, however, is not a supernatural Gothic horror film. It has a 1970s ecological message to it, and instead of a climax featuring a battle between good and evil, the story ends in a downbeat and unsatisfying manner. Those expecting a Hammer-like chiller will be disappointed in DOOMWATCH.

Those who are willing to give the story a chance might find it to be a interesting low-budget feature with some atmospheric touches from director Peter Sasdy. The ensemble cast is very good (and very renowned) for a movie of this type, though Ian Bannen in the lead comes off as a bit shrill. Believe it or not, the characters played by Bannen and Judy Geeson do not develop a romantic relationship--one more way in which the film tries to show how "serious" it is about the subject at hand. Sasdy uses the film locations well (it was actually shot in Cornwall), and he certainly knows how to get the most out of this type of material. It's a shame Peter Sasdy wasn't given a chance to make higher-class films with bigger budgets. (By the way, DOOMWATCH has a number of similarities with another film Peter Sasdy directed--NOTHING BUT THE NIGHT. That movie also has London professionals visiting a remote Scottish location in order to investigate bizarre happenings.)

Kino's Blu-ray of DOOMWATCH presents the film in 1.85:1 anamorphic widescreen. The visual quality of this disc is nothing to write home about--the picture is not very sharp, and the colors are somewhat faded. I assume that the print used by Kino was the best one available. The extras, however, are quite impressive. Not only does Peter Sasdy give an on-camera introduction to the movie, he does an audio commentary. Sasdy's talk is thorough and informative--he goes over just about every part of the production, and discusses the various artistic choices he made, and why he made them. (One hears pages turning while Sasdy is speaking, so it goes without saying that the director did his homework for the commentary.) Sasdy goes out of his way more than once to explain to the viewer that his DOOMWATCH was a feature film, and as such, could not be like the TV series. Sasdy also mentions a number of times how DOOMWATCH had a message, although the "pollution is bad" angle seems very obvious today. Sasdy sticks to the facts about DOOMWATCH, so if you're expecting stories about Hammer and Cushing & Lee, you're not going to hear them.

A very short (six minutes) interview with Judy Geeson is also included. This talk deals specifically with DOOMWATCH, and one wishes it had been expanded to include her entire career. I had the pleasure of meeting Judy Geeson at the 2016 Flashback Weekend Horror Convention outside of Chicago, and I can assure you she is a treat to interact with (more of her reminisces would have probably been more entertaining than the movie).

DOOMWATCH will appeal mostly to those fans of 1960s-70s British Gothic horror--even though it isn't really a Gothic horror film. Some might be put off by the pollution message, but it is a well-done ecological thriller. I wouldn't, however, call it a undiscovered classic.