Book Review--TOME OF TERROR: HORROR FILMS OF THE SILENT ERA 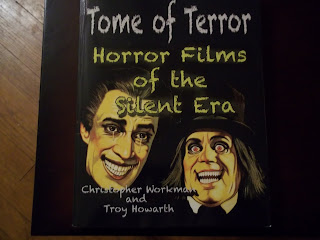 If you're like me, and are tired of the numerous remakes and reboots that define the movie-going experience of the 21st Century, you'll be surprised as I was to learn how many famous tales were adapted over and over again during the silent era. THE BELLS, SHE, THE PICTURE OF DORIAN GRAY, TRILBY, DR. JEKYLL AND MR. HYDE....heck, the versions of FAUST mentioned in this book run into the double-digits. Original thrillers written expressly for the screen were almost non-existent during this period.

All of the usual suspects are included in this volume, such as CALIGARI, NOSFERATU, THE GOLEM, and the Lon Chaney-Tod Browning collaborations, but there's plenty of obscure titles on display as well. Unfortunately many of the more interesting ones are unavailable to see or completely lost. The authors share many informative tidbits that even a film geek like myself did not know, such as the fact that there was a version of THE PHANTOM OF THE OPERA made in Germany in 1916, and that Claude Rains' father was a silent film director.

The book is heavily illustrated with stills and poster art from the era. Thankfully this TOME has an index which gives the page number a certain title appears on instead of just the year of the film. The authors consistently bring unique analysis to the films examined.

TOME OF TERROR: HORROR FILMS OF THE SILENT ERA is definitely a worthy read. Most other books that deal with fantastic films of this period cover the more famous ones and that's about it. This volume makes one realize that even though the horror film genre was still in its infancy at this time, it was more expansive than most monster movie fans assume. The authors intend to continue their series with a TOME OF TERROR on the 1940s, and I will be looking forward to it.