I'm currently reading TOME OF THE TERROR: HORROR FILMS OF THE SILENT ERA, the latest entry in Chris Workman & Troy Howarth's series of books on the history of horror films. Many of the films covered in this volume are unavailable in any form, which is frustrating, particularly since it seems the ones that sound the most interesting are the ones that are now lost.

Going through the book put me in a silent thriller mood, and venturing onto YouTube I was able to view the 1926 version of a Edgar Allan Poe-influenced story called THE BELLS. The movie is based on a play by Emile Erckmann and Alexandre Chatrian called "Le Juif Polonais". The play was filmed many times in the silent era, and the various versions are discussed in TOME OF TERROR. The play is not an "official" adaptation of Poe's poem "The Bells"--if anything the story owes more to "The Tell-Tale Heart". What makes this version of THE BELLS important today is the fact that it features none other than Boris Karloff.

Set in Alsace during the year 1868, THE BELLS concerns inn and mill owner Mathias (Lionel Barrymore). The affable Mathias is something of an easy touch--he constantly allows the customers at both his establishments to purchase items on credit. This isn't the best idea in the world, because Mathias owes a large sum of money to his grasping neighbor Jerome Frantz (played by silent movie villain Gustav von Seyffertitz). Mathias' pretty young daughter falls in love with the new Gendarme. The middle-aged Frantz desires the girl, and tells Mathias he will forgive the debt if the daughter is betrothed to him. Mathias refuses this deal, but he knows the deadline to pay is near, and he doesn't have the money to do it. Around Christmastime a wealthy Jewish merchant from Poland stops at the inn, and Mathias notices his gold-filled money belt. The desperate innkeeper murders the merchant with an ax during a snowstorm, steals his money and burns the body in a kiln. The Gendarme loved by Mathias' daughter proceeds to investigate the crime, but it is the innkeeper's conscience that pursues him the most--especially when the merchant's brother arrives with a mysterious mesmerist (Boris Karloff) who supposedly has the power to force criminals to admit their foul deeds.

THE BELLS was capably directed by James Young, who also wrote the screenplay. The movie has a nice period atmosphere, and a fine production design (it certainly doesn't look cheap). Young gives the story a number of macabre elements, such as Mathias suddenly finding his hands covered in blood (which he cannot get off), and the appearances of the merchant's ghost. Lionel Barrymore makes Mathias more and more haggard as the story goes on, and the climax features an expressionistic dream sequence in which Mathias imagines that he is on trial. The murder in THE BELLS is not a gory set-piece, but it is rather more gruesome than one would expect to see in a movie made around this time.

The real highlight of THE BELLS is Boris Karloff. His "Mesmerist" (we never find out his name) will be familiar to silent movie buffs--the man looks just like Dr. Caligari as played by Werner Krauss in THE CABINET OF DR. CALIGARI. (Karloff is quoted in a number of books as saying that it was Lionel Barrymore's idea for the hypnotist to look like Caligari.) With his large cloak, top hat, and baleful countenance, Karloff commands the viewer's attention in every scene that he appears in. The skulking mesmerist is a constant reminder to Mathias of his crime, and Karloff uses to great effect the sardonic grin that would become so familiar to those who would watch the many future horror entries he starred in. 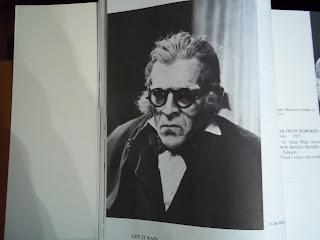 Boris Karloff as "The Mesmerist"

Karloff does not have a lot of screen time in THE BELLS, but he makes a sizable impression, even without the use of his legendary voice. He makes so much of an impression that it is hard to fathom why he was stuck playing mainly bit parts in films until his huge success as the Monster in Universal's 1931 FRANKENSTEIN. Earlier this month, I wrote a post on the 1929 version of THE THIRTEENTH CHAIR, which starred Bela Lugosi. That movie shows that Bela was already the "Bela" we know and love, screen-presence wise, before his breakout movie role in the 1931 DRACULA. The same can be said concerning Boris Karloff and the 1926 THE BELLS--Boris is definitely playing a "Karloff" type of role, way before he earned the title of Hollywood's King of the Monsters. Boris Karloff acted in dozens and dozens of films during the silent era, but THE BELLS may contain his most noticeable pre-talkie performance. That fact alone makes THE BELLS worth seeing--but it is also a very good movie as well.