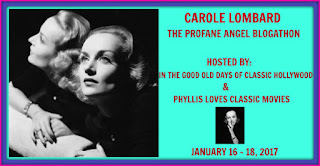 Today is the 75th anniversary of the death of Carole Lombard. Instead of focusing on the tragedy of this event, I'd rather honor my favorite actress of all time by participating in this blogathon. LADY BY CHOICE (1934) isn't one of Lombard's most famous films, but it's a perfect example of how her natural talent and appealing personality can make an average story entertaining.

LADY BY CHOICE focuses on Patricia "Patsy" Patterson (May Robson), a former showgirl who has fallen into hard times during her older years, and present-day fan dancer Georgia "Alabam" Lee (Carole Lombard), who "adopts" Patsy as a surrogate mother. The two meet each other during a night court session overseen by stern Judge Daly (Walter Connolly). Patsy has been brought in for starting a brawl at a bar, and Alabam is charged with lewd conduct because of her dance performance. Alabam gets a kick out of the feisty Patsy. Later Alabam takes part in a publicity stunt on Mother's Day which has her go to an old ladies' home and choose a new "mother". Patsy is at the home (due to the efforts of Judge Daly), and Alabam picks the old girl. Patsy moves in with Alabam and decides to try to be a real mother to her. Patsy wins enough money at gambling to get Alabam to quit her fan gimmick and start taking classes in acting, singing, and proper dancing. Patsy's attempts to turn Alabam's life around don't go so well, and unpaid bills begin to pile up. Alabam turns golddigger and makes a play for high-class lawyer Johnny Mills (Roger Pryor), the son of one of Patsy's old boyfriends. Patsy fears that Alabam is going to wind up just like her, but Alabam and Johnny really do love one another, and, despite the usual complications in 1930s movies such as this, everyone winds up happy in the end.

Elderly character actress May Robson scored a huge success as Apple Annie in Frank Capra's modern fairy tale LADY FOR A DAY. LADY BY CHOICE isn't an official sequel to Capra's film, but the role of Patsy is very similar to Apple Annie--the two hard-edged but softhearted old ladies might as well be twins. Robson is just as charming in this film as she was for Capra. What helps her to shine in LADY BY CHOICE is her co-star.

LADY BY CHOICE was made a few months after Carol Lombard's big breakthrough in Howard Hawks' TWENTIETH CENTURY. Her naturalness and comic timing really comes through here, and she and Robson play off one another wonderfully. Lombard doesn't get enough credit for how smoothly she worked with other performers (consider her pairings with John Barrymore, William Powell, Fred MacMurray, etc.). Lombard and Robson have their own very distinct screen presences, but despite that the duo work together instead of against each other. It's so fun to watch Patsy and Alabam that I was inspired to think that the two's adventures would make a great basis for a TV sitcom--but were are you going to find 21st Century equivalents of Carole Lombard and May Robson?? Doesn't the picture in this poster look more like Jean Harlow instead of Lombard?

It must be said that LADY BY CHOICE is an okay movie instead of a great one. The screenplay was by Jo Swerling. Swerling wrote several classic scripts during the Golden Age of Hollywood, but this isn't one of them. Alabam Lee seems to be set up as a brassy showgirl, but Lombard plays her more refined than that. (During the story it is mentioned that Johnny's mother doesn't approve of Alabam, which is ridiculous, especially when one factors in that Alabam's everyday wardrobe is classy as all get out.) Roger Pryor is no Clark Gable (it's amazing how many lightweight leading men Lombard was saddled with during her career). Director David Burton does an adequate job, but he doesn't bring that extra spark to the material that someone like Capra would have done. LADY BY CHOICE was released in October of 1934, and one wonders how different it would have been if it had come out in 1932 or '33. The movie has no Pre-Code bawdiness or rawness to it--we constantly hear about Alabam's fan dance, but we never get to see it till the end, and then it is stopped right after it begins. (Needless to say, it's nothing to get brought to night court for.) 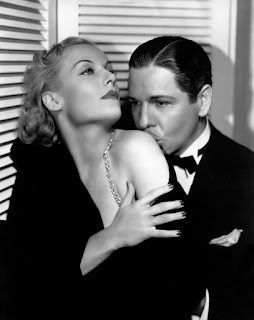 This still of Carole and Roger Pryor is racier than anything in the film.

LADY BY CHOICE is like dozens and dozens of lightweight romantic comedies made in the 1930s and 40s, and like many of those films, it would be totally forgotten today--except for the fact that it stars Carole Lombard and May Robson. One of the main jobs of a movie star during the studio period was to take underwhelming material and make it into something worth seeing--and Lombard certainly did that for Columbia in LADY BY CHOICE. Her character has a silly nickname, she's constantly in danger of being upstaged by her co-star, and her leading man has no charisma--but despite all that Carole makes watching the film enjoyable. When it comes to natural beauty and natural likability, very few women of the silver screen could even approach the level set by Carole Lombard.