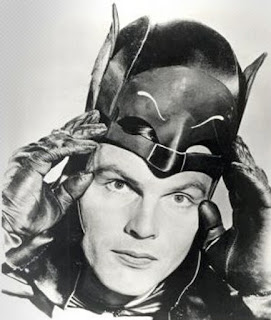 The passing of Adam West marks the passing of a childhood hero of mine. It was as a very young kid that I first started watching the 1960s BATMAN TV show. I was absolutely mesmerized by it. I hadn't begun reading comic books yet, but I didn't need to--the BATMAN TV show was a real-life comic book. To this day the show is still more accurate to the DC Comics Batman books than any of the later theatrical films. It may come off as campy--but it is the world of Batman.

Untold numbers of folks, like me, were introduced to the character of Batman through the TV show. As a little kid, I took the show seriously. I would even get scared at the end of the episodes when Batman was stuck in one of those crazy death traps. Adam West was Batman. He wasn't campy or silly to me--he was what I thought a good guy should be. To my eight-year old self, he was the ultimate superhero. Whenever West showed up on another TV show playing a "normal" character, I would watch that show, hoping that somehow he'd "turn" into Batman--and wind up being invariably disappointed when he didn't.

Later on I would watch BATMAN with a different point of view. I still didn't look upon it as a joke, however. The show was a major part of my childhood, and a major influence on what I appreciated in filmed entertainment. As an actor Adam West went through some hard times in the 1980s and 1990s, but I always looked upon him with respect and admiration.

Thankfully, as Geek Culture began to take hold in the 21st Century, West went through something of a rehabilitation. Several people who grew up watching the Adam West Batman began to make TV shows and films themselves, and the actor became sort of a father figure to the Geek community. West carved out another pop-culture role for himself by doing voice work on the animated series FAMILY GUY, and the long-overdue release of the BATMAN TV show on home video gave him plenty of chances to shine in the spotlight. West became accepted as a legend, an icon...and to many people, the true Batman.

I had one chance to meet Adam West--he was scheduled to appear at a comic con a few years ago in Chicago that I attended, but he was unable to come due to illness. (Kind of like my non-meeting of Carrie Fisher last year.) I never did get to meet him, and I certainly didn't know him personally--but I still felt I had a connection with him. That may sound silly to some, but there are performers, who, due to the circumstances and the timing of when we see them, make a profound impact on our lives. Adam West made a profound impact on mine. I happened to view the BATMAN TV show at the right age (just like STAR WARS came out at the exact proper moment for me). Adam West's portrayal of Batman shaped my perspective on what a true hero should be.

Today all over social media tributes to Adam West are pouring in. How many of us can say that we will leave such a positive effect when we leave this world? BATMAN may have been a campy TV show, but the fact that Adam West has inspired so many warm feelings from so many people is extraordinary. There have been many other actors who have played Batman. Adam West was Batman.