The latest issue of Richard Klemensen's LITTLE SHOPPE OF HORRORS magazine (issue #38) is dedicated to a complete examination of the 1973 television production of FRANKENSTEIN: THE TRUE STORY. The issue features Sam Irvin's incredibly detailed account of the making of the film, including several interviews with members of the cast & crew. The magazine also has a stunning array of artwork inspired by the production, from such talents as Mark Maddox, Bruce Timm, and Neil Vokes. It is one of the best issues of LSOH ever.

When I heard that LSOH was going to do a special issue on FRANKENSTEIN: THE TRUE STORY. I decided I should watch the film myself. I had never seen it, but I was aware of it--it was mentioned in almost all of the monster movie books I had read as a kid. Those books didn't seem to impressed with it--the consensus was that it certainly wasn't the "true story" according to Mary Shelley's novel. I acquired the film on DVD from Edward R. Hamilton Booksellers for only $5. This DVD contains the complete original three-hour presentation of the film, in two parts. I watched the DVD a few months ago, and viewed it again after completely reading LSOH #38.

Producer Hunt Stromberg Jr. planned for FRANKENSTEIN: THE TRUE STORY to be a mammoth, ambitious project. The script was written by acclaimed playwright Christopher Isherwood and his partner Don Bachardy, and Stromberg tried to get as much big name on and off screen talent for the film as he could. Sam Irvin relates all of this in LSOH #38 including the various (and noteworthy) names attached to the production at one time or another. The result is that FRANKENSTEIN: THE TRUE STORY winds up being unlike any other Frankenstein film--or any other horror film, for that matter. It's definitely unlike any other TV movie I have ever seen. The budget for FRANKENSTEIN: THE TRUE STORY was huge--so huge that the movie makes the Hammer Gothic theatrical movies made at the same time seem tawdry by comparison. The production design, the English locations, the costumes, the esteemed cast--this is more of an event instead of a Frankenstein movie.

Because it is so unique, and so unlike anything I have seen before, it is hard for me to put it into context with other Frankenstein adaptations. I can't compare it with another horror film--heck, I can't even compare it with any other TV movie or mini-series.

The film was originally broadcast on the NBC Television network in two parts. Part One begins in the early 1800s, as young doctor Victor Frankenstein (Leonard Whiting) witnesses the accidental drowning of his younger brother William. (This sequence is handled so quickly and abruptly that it dilutes the impact it is supposed to have on Victor.) Frankenstein is so unnerved by this incident he determines to continue his medical studies, with the ultimate goal of bringing life from death. The young man meets the misanthropic Dr. Henry Clerval (David McCallum), and the pair are soon constructing their own grand experiment--a perfect body to give life to. Frankenstein's loyalty to Clerval disappoints his fiancee Elizabeth (Nicola Pagett). Clerval introduces Frankenstein to a former "colleague", a mysterious older man named Dr. Polidori (James Mason). Before Victor and Clerval can finish their experiment, Clerval dies--which leads Victor to put Clerval's brain into their creation and give it life.

The Creature (Michael Sarrazin) is so handsome that Victor describes him as "beautiful". Victor teaches the Creature basic social skills, and even dresses him up and takes him to the opera. But Victor soon finds out that the Creature is slowly reverting back to its once-dead form. The Creature's fine features are now deteriorating, and Victor now no longer wants to have anything to do with him. The Doctor apparently can't help his creation, and he can't put it out of it's misery. The saddened and hurt Creature throws himself off of a cliff into the sea....but he survives.

Part Two has the Creature wandering in a forest and coming upon an old blind man (Ralph Richardson). The Creature befriends the blind man, and pays visits to the man's cottage, but manages to avoid being seen by the blind man's beautiful granddaughter Agatha (Jane Seymour) and her husband. The Creature observes Agatha from afar, and falls in love with her. When the Creature is revealed to Agatha and her husband, tragedy ensues--the husband, treating the Creature as a monster, attacks him and is killed, and Agatha, while fleeing in terror, is run over by a horse-drawn carriage. The heartbroken Creature takes Agatha's body to the old house where he was created by Victor. Dr. Polidori has taken over the place, and he coerces the now married Victor into helping create a new creature using Agatha's body. This new experiment, called Prima (also played by Seymour), is alluring, but heartless. Victor and Polidori try to destroy the Creature, but fail--and the being barges in on Prima's debut party into society and literally rips her head from her body. In the aftermath Victor and Elizabeth flee on a ship to America--but Polidori and the Creature are on board as well. The enraged Creature kills Polidori and causes the crew to leave on lifeboats, leaving only himself, Victor, and Elizabeth on the ship. The Creature steers the vessel north to the Arctic, where he and his creator meet their fate.

At three hours long, FRANKENSTEIN: THE TRUE STORY presents the viewer with a lot of material. It's a sprawling story that needs more than one viewing to appreciate it. It incorporates several elements from the Shelley novel, but also many incidents from the early classic Frankenstein films made by Universal in the 1930s. Michael Sarrazin is a magnificent Creature, and you can't help feel sorry for him. Frankenstein is proud of him when he is first "born", but he treats him like a dress-up doll. As soon as the Creature begins to lose his looks, Victor basically abandons him (you don't need to know that the producer and screenwriters of this film were gay to figure out the subtext here). Sarrazin is helped out by a excellent makeup design from Harry Frampton.

Leonard Whiting doesn't get much of a chance to shine as Victor Frankenstein, but that's not the actor's fault. As I see it, Victor in this story comes off as weak and indecisive. Whether he is working with Henry Clerval or Polidori, Victor definitely acts like the junior partner. His scientific accomplishments seem more the result of luck and his associates' knowledge than of his own doing. (To be fair, it has to be said that the Dr. Frankenstein portrayed in Mary Shelley's novel isn't the most dynamic guy in the world either.) Instead of a brilliant and ground-breaking scientist. Victor in this tale is a young man way over his head. Even his wife Elizabeth has more gumption than he does (Nicola Pagett is very good in what is usually a boring role). Whiting as Victor reminds me of those handsome young actors who played the assistants to Peter Cushing's Baron in the Hammer Frankenstein films. 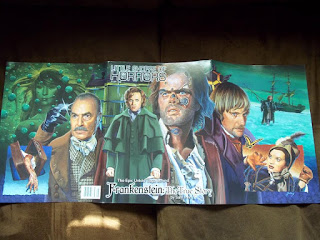 The fantastic triple cover for LITTLE SHOPPE OF HORRORS #38, by Mark Maddox

James Mason as Polidori dominates every scene he is in--he makes every line of dialogue he utters sound like a droll witticism. (When there is a scene with just Victor and Polidori, poor Leonard Whiting doesn't stand a chance.) Polidori's adventures with Prima are intriguing, but they also put Victor and the Creature off to the sidelines. Jane Seymour makes a huge impression as the strangely beguiling Prima, and her destruction at the hands of the Creature is without doubt the most thrilling moment of the story. (In the DVD I have of the film, there's nothing gory about it, but I'm still amazed this was allowed to air on early 1970s American network TV.)

Hunt Stromberg Jr. went out of his way to cast several star cameos--among the names he gathered were Agnes Moorehead, Michael Wilding, and John Gielgud. It's great to watch these legends at work, but as with the Prima scenes, the cameos have a tendency to distract from the main characters.

FRANKENSTEIN: THE TRUE STORY has many outstanding individual moments. The creation sequences are unlike any shown in a Frankenstein film. The Creature comes to life from solar power--no dark & stormy night here. Prima seems to be created through Oriental mysticism instead of science--this sequence is highlighted by colorful chemicals and lava lamp-type effects. The climax of the story is superb, featuring a violent storm and finally an ice-caked ship stuck in the eerie frozen wastes of the Arctic (the production design here is magnificent). Director Jack Smight does a fine job, and he's immeasurably helped by crack cinematographer Arthur Ibbetson. Producer Stromberg wanted a bigger name than Smight as director, but that probably wouldn't have been to his liking--as Sam Irvin makes very clear, Hunt Stromberg Jr. was the main creative force behind the production.

FRANKENSTEIN: THE TRUE STORY is an unusual film, and a intriguing one. I think the project would have been better served with a shorter, more concise script--or maybe it needed to be longer to adequately explore all the many pathways the story takes. (A shorter version of the film was released overseas as a theatrical feature--I've never seen it but it has been generally dismissed by critics.) Edward R. Hamilton is still selling it at $5, and it is worth adding to any classic horror film fan's collection. It is also worth picking up a copy of LITTLE SHOPPE OF HORRORS #38 and delving into Sam Irvin's authoritative account of the making of the film--an account which is plenty thrilling and adventurous itself.
Posted by Dan Day, Jr. at 12:03 PM