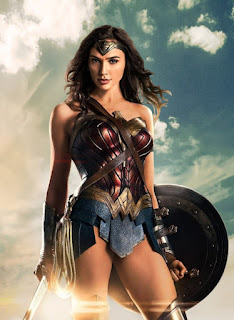 Does WONDER WOMAN "save" the DC Cinematic Universe? Let's say it's a step in the right direction. It's a good movie, but in my opinion, not a great one. The main character is more impressive than the film itself.

Gal Gadot is without doubt the best thing concerning WONDER WOMAN. I'll even go as far to say that she gives the most appealing and charismatic portrayal of a major DC Comics heroic character since Christopher Reeve in the very first SUPERMAN. After years and years of seeing DC movies featuring actors who were unsuited for their roles (Christian Bale, Ryan Reynolds, Henry Cavill, etc.), it's refreshing to have one of the company's most legendary figures capably filled on the big screen.

Unfortunately Gadot has to share a lot of screen time with Chris Pine (who at least isn't as annoying as he is as the fake Captain Kirk). One of the things that hurts WONDER WOMAN is that it is an origin story, and I've always felt that those tales hold the characters back. We see Amazon Princess Diana's childhood on the secret island of Themyscira, and her abrupt introduction to the outside world of men through American intelligence agent Steve Trevor (Pine). Diana enters the "normal" world right at the climax of World War I, where evil Germans (of course) are hatching a scheme to release a super gas and change the tide of the conflict, while killing millions.

The real origins of the comic book Wonder Woman came out of World War II. I assume that the World War I angle was chosen for the film so people wouldn't be reminded of the first Chris Evans CAPTAIN AMERICA movie. But you can't help but be reminded of that Marvel feature while viewing WONDER WOMAN. The character of Thor also came to my mind--both Thor and Wonder Woman are the children of gods, and both of them struggle to deal with the quirks and foibles of humankind. The setting of WWI is very unusual for a summer geek flick--the story even showcases a real historical person in the figure of German General Erich Ludendorff. (This made me wonder--if Ludendorff has any living relatives or descendants, will they start showing up at Comic Cons and rake in appearance fees??)

Director Patty Jenkins does an okay job, but the movie has a lot in common with most 21st Century action features--a desaturated color scheme, a two hour-plus running time, and fight scenes dominated by MATRIX-style slow-motion movements. Once again, we have a group of villains who are underwhelming--and yes, the main bad guy gets to shoot out tendrils of energy from his fingertips at the end. I have to reiterate that I liked the movie--it's just that I've seen so many of these things that they all start to run together. When you've sat through dozens of scenes of CGI bodies flying up in the air and hitting the pavement over and over again, the effect of all that begins to wane.

I'm well aware of the fact that many folks out there want WONDER WOMAN to succeed in the hope that it will further certain causes and issues they care about. When I write a post about a particular film, I'm not interested in being politically correct--I'm attempting to articulate how I personally felt about the film. WONDER WOMAN is a good movie, especially from a DC standpoint, but I wouldn't call it one of the greatest comic book films ever made. The character of Wonder Woman--and Gal Gadot--deserves to be in a film that doesn't have the baggage of an origin story or an unnecessary leading man.
Posted by Dan Day, Jr. at 2:35 PM