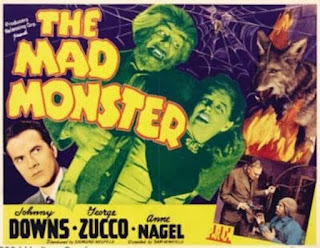 It's low-budget old monster movie time again, courtesy of Producers Releasing Corporation, better known as PRC. The film is THE MAD MONSTER (1942), starring the great George Zucco. It also features Glenn Strange, best remembered for his portrayal of the Frankenstein Monster in Universal chillers of the mid-1940s. In THE MAD MONSTER, Strange plays a werewolf--and a takeoff on Lon Chaney Jr's Lennie character to boot.

Many Poverty Row horrors waste a lot of running time before getting interesting, but THE MAD MONSTER starts off at full throttle. In the first ten minutes of the story, we see Dr. Lorenzo Cameron (George Zucco) inject the blood of a wolf into his country-bumpkin handyman Petro (Glenn Strange). Petro soon turns into a wolf man (the transformation sequence is very impressive for a low budget movie such as this), and Dr. Cameron becomes exultant. Zucco's eyes nearly pop out of his head as he starts railing about how his "scientific breakthrough" will create an army of wolf men that no enemy country will have the power to stop! Yes, it appears Dr. Cameron is just trying to do his part for the war effort! (Did Cameron ever try to tell FDR about his plans?) Cameron then really lets loose, beginning an argument with a group of scientific colleagues that have dismissed his theories. The thing is, only Cameron and the Wolf-Petro are in the basement laboratory--the wacky Doc is debating with foes who are not actually there (they are presented on-screen as transparent figments of Cameron's imagination). This opening is the best sequence in the film.

Because he has been disgraced by the scientific community, Cameron has rented an old house out in the country to continue his experiments. With him is his daughter Lenora (played by Anne Nagel, who already had Scream Queen status due to her appearances in Universal's BLACK FRIDAY and MAN MADE MONSTER). Lenora is mystified at why her father has moved to this desolate spot, and at what he is exactly doing (considering that George Zucco is her father, she ought to know the guy is up to no good). Cameron continues to inject the unknowing Petro with wolf's blood, and the half-witted he-wolf soon begins to transform on his own. One night while wondering about the nearby swamps, Wolf-Petro sneaks into a family's shack and kills their young daughter. This alerts the authorities, and gets the attention of Lenora's boyfriend Tom, who is a snoopy reporter (every Poverty Row horror has to have at least one).

Cameron has more important things on his mind, such as a plan to use Petro to wipe out his scientific rivals once and for all. The Doctor puts his nefarious scheme in motion, but Tom and the authorities start getting more suspicious. Lenora finds her way into her father's secret laboratory and comes across Wolf-Petro. A raging storm outside lets loose a bolt of lightning which strikes the house and causes a fire (divine retribution, perhaps?). The now-uncontrollable Petro attacks and kills Cameron as the house burns down around them. Tom and Lenora escape to safety.

THE MAD MONSTER was obviously influenced by Universal's hit THE WOLF MAN, which was still in theaters as THE MAD MONSTER was being produced. But I also think another Universal film, MAN MADE MONSTER, was a huge influence as well. In that one, Anne Nagel was also the leading lady, and she felt sorry for Lon Chaney Jr's none-too-bright Dynamo Dan, who in turn had a crush on her. A similar situation arises in THE MAD MONSTER--Nagel is kind to Petro, who happens to be sweet on her (it needs to be pointed out that Petro makes Dynamo Dan look like a nuclear scientist). Throw in the fact that when Petro is "normal", he acts very much like Lon Jr's interpretation of Lennie in OF MICE AND MEN, one could say that THE MAD MONSTER owes a great deal to Lon Chaney Jr's then-recent burst of stardom.

There's only one full-out wolf transformation sequence in the entire film--the one in the opening sequence. I'm sure this was done because of the budget, but director Sam Newfield does come up with some novel ways to present the wolf version of Petro. At one point Petro is sitting down, while wearing a wide-brimmed hat. He appears to doze off, and when he raises his head, he's fully transformed, the hat having hidden the need to use special effects. In another sequence, Petro is riding in a car driven by one of Dr. Cameron's scientific rivals, and when the man happens to glance over, Petro is transformed and ready to strike. The makeup used on Glenn Strange was created by Harry Ross, and of course it is not in the same class as Jack Pierce's iconic Wolf Man creations for Universal. Ross's makeup doesn't hold up very well the more you get a good look at it, but I think it does work within the context of the film.

There are a number of elements which make THE MAD MONSTER a cut above the usual low-budget chiller made during this period. One is the atmospheric mist-shrouded swamp settings in which the wolfish Petro rambles about--usually in a Poverty Row horror the story takes place in the interior of a big house, and that's nearly all we see. Petro's killing of a young child is disturbingly unusual, especially for a film of this vintage. Director Newfield handles it rather effectively--we see the young girl playing with a ball in her bedroom, while in the background the transformed Petro sneaks in through the window. We next see the ball bouncing into another room, then the girl's mother running into the bedroom and screaming. We are never shown the actual killing, or the girl's body--but that makes the act more unexpected and haunting.

George Zucco was one of the greatest movie mad scientists of all time, and he gives his role in THE MAD MONSTER way more intensity and passion than it probably deserves. Listening to Zucco's silken, authoritative voice spout out recriminations against his scientific rivals is a monster movie geek's treat. Without the brilliant presence of someone like George Zucco, these types of films would be hard to get through. Was an actor of his talent and stature wasting his time on such material as this? Maybe, but it is films like THE MAD MONSTER that have made Zucco a cult legend, while many of his contemporaries who appeared in more supposedly prestigious fare are almost forgotten. (By the way, Zucco sports a toupee in this movie.)

Anne Nagel, as mentioned, was on familiar ground here. There really isn't much to the character of Lenora--she's attractive and has a pleasant personality, but she doesn't get much to do. One thing that surprised me was the fact that she doesn't put on a nightgown and get carried off by Petro! Johnny Downs actually gets top billing as Tom, even though he doesn't show up until about a half-hour into the film. (It's a shame that Zucco didn't get top billing.) As I've stated several times before, the "David Manners" type of role in a classic horror film is the worst one to play for any actor. Downs isn't as annoying as most B movie reporters, and here, that's a problem--if he were as obnoxious as say, Wallace Ford, he'd at least be memorable.

Seeing Glenn Strange play a wolf man before his turn as the Frankenstein Monster should be on any old movie buff's bucket list. I think Strange overdoes it a bit as "normal" Petro (you wonder whether he was trying to be funny or just pathetic). He certainly has the bulk to be a movie monster, and he does look creepy when he's stalking through the mists. As Wolf-Petro he does have a tendency to say "AAARRHHH" a lot, which makes you wonder if he's playing a wolf man or a pirate. The tragedy angle of poor, put-upon Petro, especially in his relationship with Lenora, could have been developed more.

I have to say that THE MAD MONSTER ranks up among the best of the Poverty Row horrors made in the 1930s-1940s. I'd even venture to state that it's more impressive than some of Universal's lesser chillers made during the same period. It has a great mad doctor performance by George Zucco, some atmospheric scenes, and a few unusual & notable elements. I'd love to see it be restored and released on home video by a company such as Kino or Olive, with commentary by either Greg Mank or Tom Weaver (most of the information in this post was gleaned from the works of both of those men).
Posted by Dan Day, Jr. at 8:39 AM