THE OUTLAWS IS COMING

Before Adam West became Batman, he appeared in a number of roles that were typical for a young, handsome actor in the early 1960s. West showed up in several TV shows and played many second male lead parts in theatrical films. One of his most notable performances in his pre-Batman period has him alongside the Three Stooges in THE OUTLAWS IS COMING, released in 1965.

THE OUTLAWS IS COMING is a Western spoof and the very last theatrical feature in which the Three Stooges starred in. West plays Kenneth Cabot, who works for a nature magazine in 1871 Boston. Cabot is sent out West to discover why so many buffalo are being killed. Cabot is a timid sort, so the Stooges are sent along to accompany him. (The fact that the Stooges have to help Cabot out tells you all you need to know about the man's personality.)

The destruction of the buffalo is tied to a plot to cause various Indian tribes to go on the warpath, thus allowing Western desperadoes to take advantage of the situation. The meek Cabot is named Sheriff of Casper, Wyoming as a joke, but with the help of the Stooges and the gorgeous Annie Oakley (Nancy Kovack), the bad guys are stopped and the Indians are pacified.

THE OUTLAWS IS COMING is one of the better full-length Stooges films made during the team's Joe DeRita period. (In my opinion, the best Three Stooges theatrical feature is THE THREE STOOGES MEET HERCULES.) The full-length Stooges films can in no way match the manic intensity of the team's short subject work in the 1930s and 1940s. The shorts only averaged about 15 to 18 minutes long, and characterization and plot took a back seat to wild gags and slapstick. The full-length features had to have more of a story, and other characters that the Stooges could interact with. The violent slapstick was toned down, due to the fact that the Stooges weren't getting any younger (Moe was in his late 60s), and parents groups were complaining over the Stooges' physicality being showcased for kids on TV throughout America. The addition of Joe DeRita as Curly Joe also affected how the films turned out, since DeRita wasn't anywhere near as outlandish as Curly or Shemp.

Norman Maurer (who happened to be Moe's son-in-law) was the producer & director of THE OUTLAWS IS COMING. Maurer also worked on the story with long-time Stooges gagman Elwood Ullman. The two men brought more satire and visual humor to OUTLAWS instead of the usual slapping and punching. The movie makes references to such early 1960s pop-culture items as the Beatles, GUNSMOKE, and THE MUSIC MAN. The group of bad guys called in to deal with Adam West's character includes such Western legends as Wyatt Earp, Bat Masterson, and Jesse James. The movie puts forth the idea that these paragons of the frontier turned to good because the Stooges forced them to! (There's no real climatic shootout because the Stooges have stuck the gunslingers' pistols inside their holsters with industrial-strength glue.) The Western legends were played in this film by a group of TV hosts that played Stooges shorts on programs across the U.S., a canny bit of cross promotion. 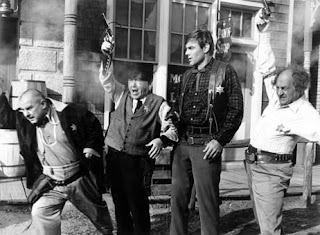 The Three Stooges with Adam West

There's still some slapstick in THE OUTLAWS IS COMING--the Stooges have their own misadventures with the industrial-strength glue, and yes, there is a pie fight at the end. The Stooges do dress up as Indians, and while some may look upon the scenes with the tribes as politically incorrect, they're basically harmless (Henry Gibson gets a lot of laughs as a hip-talking brave).

As for Adam West, he's stuck playing a milquetoast, but it has to be said that he does it very well. At least his Cabot doesn't come off as so pathetic that the audience dismisses him. West can't help but be upstaged by the Three Stooges, but what really hurts him is that his leading lady winds up stealing the film. Nancy Kovack makes a huge impression as the brash Annie Oakley. Not only is she a stunning woman, she brings a lot of sass and personality to the role. It is Annie Oakley who secretly does all of Cabot's "trick" shooting--the relationship between Annie and Cabot resembles that between Bob Hope and Jane Russell in the PALEFACE movies. Annie also has a crush on Cabot (though why she would is a mystery). Whenever Nancy Kovack shows up in movies like JASON AND THE ARGONAUTS or DIARY OF A MADMAN, you can't take your eyes off her (at least I can't). She deserves more attention from Old Movie Weirdos. 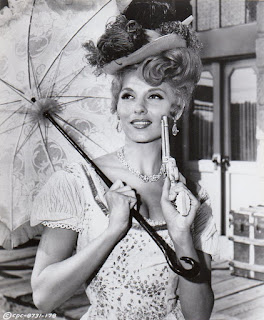 THE OUTLAWS IS COMING is a nice little Western spoof. Stooges fans will appreciate it the most. It doesn't have the amount of big laughs that a typical Stooges short would have, but it is pleasantly amusing. Usually the "normal" leading man & lady of a full-length Three Stooges feature wind up being forgettable, but that's not the case here. Adam West and Nancy Kovack give THE OUTLAWS IS COMING an extra special ingredient.
Posted by Dan Day, Jr. at 11:47 AM