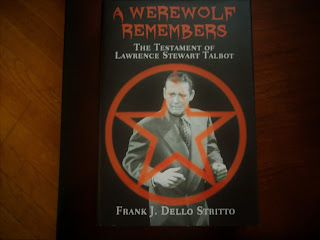 I'm sure most of you are aware of the so-called "Dark Universe"--the attempt by Universal Studios to have their own Marvel-like multi-feature storyline featuring legendary classic monsters instead of comic book characters. I don't have too much confidence in this idea--but if Universal was smart, they'd hire author Frank J. Dello Stritto right away as a production consultant. His new book A WEREWOLF REMEMBERS--THE TESTAMENT OF LAWRENCE STEWART TALBOT is a unique and fascinating examination of the Universal Monsters legacy in the form of a "biography" of Lawrence Talbot, the character played by Lon Chaney Jr. in five films, and better known as The Wolf Man.

The author starts out with the supposition that Lawrence Talbot disappeared after the events of ABBOTT & COSTELLO MEET FRANKENSTEIN, and Talbot's steamer trunk was left behind in an apartment house. The landlord of the house was the author's Uncle, and after his passing Talbot's journals were found inside the trunk. Dello Stritto "reveals" the contents of the journals.

The result is a Old Monster Movie Fan's dream. This book is not written as a joke, or a gimmick. The author has obviously spent a lot of time thinking about the Universal Monster series, and he creatively fills in several of the "blanks" that exist in the Universal Monster timeline. One of the things that has always bothered me about the original THE WOLF MAN is the idea that Claude Rains and Lon Chaney Jr. were supposed to be father & son. Dello Stritto explains why the two could be so different yet so closely related by delving into the history of the Talbot family, and ingeniously using stills of Rains and Lon Jr. from other films to represent other members of the clan. The author also goes into what happened to the Wolf Man when he was supposedly "dead" in between his film appearances. We also find out why Talbot was back to his wolfish self in A & C MEET FRANKENSTEIN when he was apparently "cured" at the end of HOUSE OF DRACULA.

Dello Stritto doesn't just limit himself to Universal horror films. Many characters from other thrillers made in the 1930s-1950s pop up in the narrative...and quite a few fictional folks from non-horror films of the period as well. I don't want to reveal who some of these characters are, simply because I want the reader to be as pleasantly surprised by these cameos as I was. Most of these characters will be familiar to above-average film buffs, but even I had to check on IMDB to figure out who some of them were.

These classic film references are not just a film geek's crazy theories haphazardly thrown together. Dello Stritto weaves pop culture signposts in and out of the tale with the touch of an assured novelist. The overall story never seems contrived, or ridiculous....and I dare say it holds together far better than the scripts of the films that the author was inspired by.

I really enjoyed this book--in fact, it even exceeded my expectations. The creativity shown in it is astounding--I can't tell you how many times I stopped reading and said to myself, "I wish I had thought of that!" I've spent most of my life watching the Universal monster movies, and the various other films referenced in this book, and I know them like the back of my hand. Seeing them presented this way--as if they actually happened in history, and that their stories and characters overlap with one another--is pure catnip for movie geeks.

I do have to say that your enjoyment of this book will be directly related to how much of a film buff you are. It was published by Cult Movie Press, and it has a very attractive design. It runs over 500 pages, so you are certainly getting your money's worth. I believe it is one of the best movie books I have read in the last few years. I could go on and on about this book, and what's in it, but I don't want to, because it needs to be read, instead of blogged about. Here's hoping that Frank Dello Stritto winds up writing a series of these books--maybe next there will be a look at the life of Baron Victor Frankenstein, as played by Peter Cushing?