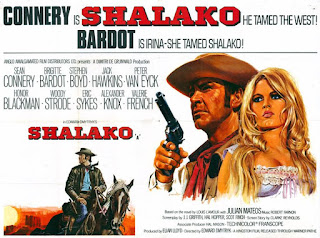 Movies don't get much more offbeat than SHALAKO. The 1968 Western was filmed in Spain, directed by a man who came out of the Hollywood studio system, and stars a collection of international actors. SHALAKO has just been released on Region A Blu-ray by Kino Studio Classics.

Sean Connery is SHALAKO--this was one of the first films he made after his initial retirement from the role of James Bond. The movie was based on a novel by Louis L'Amour, and a text introduction by the author states that throughout the 19th Century, European elites would take excursions into the American frontier in search of adventure and excitement. Connery's Shalako, a frontier scout, encounters a group of such aristocrats in the American Southwest. The group, which includes a Countess (Brigitte Bardot), a Baron (Peter Van Eyck), an English couple (Jack Hawkins and Honor Blackman), and a former U.S. Senator (Alexander Knox), has been led into Apache territory by their unscrupulous guide (Stephen Boyd). Shalako tries to warn the group of the danger that they are in, but they refuse to take him seriously, leading to the Apaches attacking and the embattled party having to work together to survive.

During the beginning of this film it takes some getting used to seeing Connery decked out in cowboy gear and riding a horse, but he does rather well in the role and the period. The actor is certainly masculine enough to put across the idea that he's someone well versed in the ways of the frontier. The characters of the hunting party are basically arrogant fools, and one wonders why Shalako would risk his life for them. Shalako is interested in the Countess, for obvious reasons (she's played by Brigitte Bardot, after all), but it's hard for a viewer to make a connection with her because Bardot's accent is so thick it's almost impossible to understand what she's saying. (Bardot also spends the entire movie wearing enough eyeliner to punch a hole in the ozone layer). Shalako may go out of his way to save the aristocrats for the Countess's sake, but it's doubtful the two characters could have a lasting relationship.

The leader of the band of Apaches is man called Chato, and he's played by Woody Strode. Apparently Chato is the same character played by Charles Bronson in CHATO'S LAND (talk about your shared cinema universes). Strode makes a powerful impression with very little screen time, but the big showdown between Chato and Shalako at the end of the film is something of an anti-climax.

A couple of other Bond veterans were part of the SHALAKO crew--cinematographer Ted Moore and stuntman/stunt arranger Bob Simmons. Simmons was kept pretty busy on this film (lots of folks fall off of horses in this story), but director Edward Dmytryk handles the action sequences in a generic fashion. (Dmytryk, who is more notorious for his involvement in the Hollywood blacklist controversy of the early 1950s, made a far better Western called WARLOCK.) As for Moore, his photography is hindered by the arid, depressing Spanish locations (if you've seen a number of Spaghetti Westerns, you might actually recognize some of them).

The Spanish locations, and the international cast, reminds one of a Spaghetti Western--but SHALAKO is nowhere near as outlandish or stylish as a typical outing from that genre. The movie will be most appreciated by Sean Connery fans and film buffs.
Posted by Dan Day, Jr. at 8:53 AM