BATMAN: MASK OF THE PHANTASM On Blu-ray 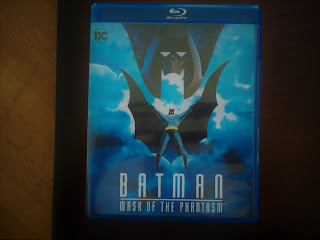 A REAL Batman movie has just been released on Blu-ray from the Warner Archive. BATMAN: MASK OF THE PHANTASM (1993) was produced by the folks behind the wonderful BATMAN: THE ANIMATED SERIES. That TV show--and this movie--are far more truer to Batman's comic book roots than any of the character's live-action appearances.

Major gangsters are being killed in Gotham City, and the Batman is being blamed for it. The Caped Crusader's investigations of the murder wave lead him to some painful memories--mainly a broken relationship with the beautiful Andrea Beaumont, a woman that Bruce Wayne almost married. Andrea may have a connection with the gangland killings through her father. Batman's pursuit of this new vigilante--the Phantasm--also puts him in the path of the nefarious Joker, with devastating revelations for all concerned.

Clocking in at a compact 76 minutes, this movie might be mistaken as just an extra-length episode of BATMAN: THE ANIMATED SERIES, but it's much more than that. MASK OF THE PHANTASM carries a PG rating, but it is a very dark story. The Phantasm does kill people, after all, and much of the story takes place during rain-soaked night scenes. During a flashback concerning Bruce Wayne's romance with Andrea Beaumont, the millionaire crime fighter feels guilty that if he marries the woman, he is turning his back on his vow to avenge his parent's deaths--which leads to Bruce having a breakdown in front of his parents' graves. This sequence has more emotional resonance than all the live-action Batman movies combined.

Usually when there is a romance for Bruce Wayne in a Batman movie, it comes off as contrived. Here it's totally believable, due to the earnest vocal performances by Kevin Conroy (who has portrayed the Dark Knight more than any other actor) and Dana Delany (who would go on to provide the voice of Lois Lane in Warner's Superman animated series). The Bruce Wayne-Andrea Beaumont relationship gives MASK OF THE PHANTASM a layer of dramatic weight that the "real" DC movies do not have.

The Joker has a only a supporting role in this film, but it's an important one, and Mark Hamill is dangerously funny as the Clown Prince of Crime. We also get to hear such character actors as Stacy Keach, Abe Vigoda, and Dick Miller. I would be remiss if I did not mention the droll subtlety of Efrem Zimbalist Jr. as Alfred.

BATMAN: MASK OF THE PHANTASM comes to Blu-ray in its original theatrical aspect ratio of 1.78:1 widescreen. The movie is also presented in the 1.37:1 aspect ratio. The movie looks much brighter than the old DVD version, but it retains the classic animated look, which I prefer to today's too-perfect and too-sterile computer animation. The sound is presented in DTS-HD 2.0 stereo, and it is a booming mix, showcasing the action scenes and Shirley Walker's haunting music score.

I've always felt that BATMAN: THE ANIMATED SERIES was the best representation of Batman in any medium other than DC comics. MASK OF THE PHANTASM was made during the series' height, and I can truly say that the only better Batman movie that has been made since is BATMAN BEGINS. If you think that animated means "kids stuff", you would be totally off the mark concerning MASK OF THE PHANTASM. It is a Batman movie for true Bat-fans. I do have to point out that it might be too dark for very young children.