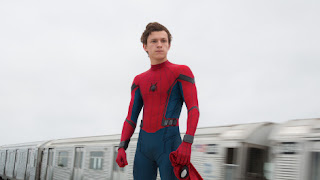 The Marvel Cinematic Universe steamroller continues with SPIDER-MAN: HOMECOMING. Tom Holland made a fine debut as the Web Slinger in CAPTAIN AMERICA: CIVIL WAR, and he capably handles the responsibilities of being the main star of a major comic book film.

Holland is the third big-screen Spider-Man in the last 15 years. At this rate, in a couple of decades from now, there will be as many Spideys as Doctor Whos. Hopefully Holland will stick around for awhile, because he's appealing and believable as a misfit teen aged Peter Parker. This new Spider-Man film spends a lot of time dealing with Peter's high school adventures, so if you are like me and don't look back too fondly on those years, you might get somewhat impatient during these scenes.

But there is plenty of requisite comic book movie action. Remember that now the movie Spider-Man is an official part of the MCU, which thankfully broadens the character's scope. Spidey's taste of action in CIVIL WAR leaves him hungering for more, and badgering Iron Man/Tony Stark (Robert Downey Jr of course) for a shot at the big time. Stark provides Peter with a special tripped-out Spidey suit, and the young hero is able to "communicate" with it. This comes very close to the Iron Man-Jarvis dynamic....but Peter's gadgets are taken away from him before the finale, which sets up a variation of the "with great power comes great responsibility" motif, provided by Tony Stark, of all people.

Despite Holland's fine performance, the real standout of the film is Michael Keaton as Adrian Toomes, aka "The Vulture". Many of the Marvel Films' villains have wound up being underwhelming, but Keaton's Toomes breaks the mold. Keaton's Vulture isn't a powerful being with an outlandish scheme for global domination--he's an ordinary guy who feels he's doing what he needs to support himself and his family. He's someone that you could believe might really exist, and Keaton's interactions with Holland are some of the best hero-villain confrontations in comic book movie history.

I do have to point out that the major plot revelation in this film might be too much of a coincidence...but I still wouldn't put it in the "My mother's name is Martha" category. This movie is also definitely skewed toward the younger crowd, with all the high school hijinks. But old fogeys like me will enjoy it--I certainly did. I was kind of surprised that Marisa Tomei's Aunt May didn't have more of a major part in the proceedings, but that's probably because she's being set up for an important role for the next Spider-Man film (watch HOMECOMING and you'll know why I think that). SPIDER-MAN: HOMECOMING is fun and enjoyable, and it's a comic book movie you can take kids to see.
Posted by Dan Day, Jr. at 2:25 PM