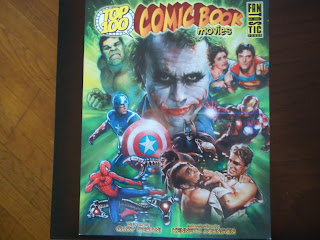 In the early 2010s, IDW in association with Fantastic Press released a series of books on what might be considered the best films from three distinct genres. The books were TOP 100 HORROR MOVIES, TOP 100 SCI-FI MOVIES, and TOP 100 FANTASY MOVIES. All the volumes were written, edited, and designed by Gary Gerani (who is the main force behind the many STAR WARS Topps trading card books). The latest book in the series is TOP 100 COMIC BOOK MOVIES.

I have all the books in the TOP 100 series. They have a colorful, clean design, with several stills from the movies discussed. Gerani gives a concise overview of each film, and includes basic cast & crew information and a very brief (thankfully) plot summary. He then goes into why he has included the film into the book's top 100. The books are for more of a mainstream audience than hard core film buffs, but I appreciate that tack--by doing this the author avoids being pretentious and he also brings up films that are not one of the "usual suspects" when it comes to lists like this.

TOP 100 COMIC BOOK MOVIES continues in the same vein as the other volumes in the series. The one drawback of this book is that the way these comic book adaptations are being churned out, Gerani may have to rewrite the whole thing about three years from now. That being said, the author does not strictly deal with only major comic character films made in the past couple decades. Movies that have been adapted from newspaper comic strips qualify for this list, so we get films such as the FLASH GORDON serials, the 1982 ANNIE, and a 1931 tale called SKIPPY starring a very young Jackie Cooper (who of course went on to play Perry White in the Christopher Reeve SUPERMAN movies).

I have to say that out of all the TOP 100 books the comic book entry is the one on which I disagree with the author the most on the placement of certain films. I think he has both X-MEN and WATCHMEN too low, and he has the recent DC films way too high. I don't have any major problems with the book overall though. If you love the 21st Century big-budget spectaculars, you'll find many of them here--and the Marvel Cinematic Universe is well-represented. (Gerani's take on some of the various MCU entries is quite unique.) I'm not going to reveal what the author believes is the No. 1 comic book movie, but if you are a purveyor of Geek Culture, you can easily figure it out on your own.

At the end of the book Gerani gives a quick appreciation of several comic book movies that failed to make the list, and he names his Top 10 Comic Book Movie Makers. The book also has a very welcome index.

A few folks may not like to admit it, but the fact is that films based on comic book material are basically driving and sustaining the entertainment industry. I think that ignoring this, or treating comic book movies as unworthy of proper analysis and discussion, is a mistake. TOP 100 COMIC BOOK MOVIES is a fun, colorful, easy to read book that is a step in the direction of treating these films as a separate genre that deserves articulate and thoughtful critical interpretation.
Posted by Dan Day, Jr. at 12:23 PM