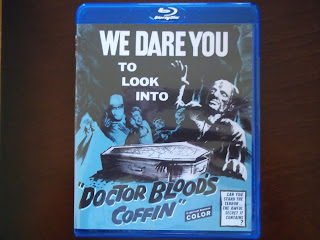 I've often said that the best thing about the 1960 English horror entry DOCTOR BLOOD'S COFFIN is seeing Hazel Court in a nurse's outfit. The movie had been available for many years on several public domain home video releases, and now Shout Factory has put it out on Blu-ray.

What makes DOCTOR BLOOD'S COFFIN stand out more than anything else is the fact that it is set during the time in which it was made, instead of the usual English Gothic 19th Century neverland. Dr. Peter Blood (Kieron Moore) returns to his Cornish home village of Porthcarron from Vienna, and begins to secretly use the locals as guinea pigs for his experiments in organ transplants. At first, no one suspects Peter, mostly because his father (Ian Hunter) is the town's beloved GP. While undertaking his nefarious activities, Peter still finds time to romance his father's pretty widowed nurse, Linda Parker (Hazel Court). Linda discovers what Peter is up to, leading to a head-scratching decision by the doctor to revive the woman's late husband. This act winds up giving Peter his just desserts.

The biggest weakness this movie has is the lead role. There's nothing wrong with having a bad guy as the main character in a film, if handled properly. It's just that here the character of Doctor Blood as played by Kieron Moore comes off as uninteresting. The actor is very miscast as a mad scientist--he lacks the dynamic intensity of a Peter Cushing, and he doesn't have the bravado of a Lionel Atwill or a George Zucco. I believe this movie would have worked better with someone else more suited to play Doctor Blood--could you imagine if Michael Gough had been cast in the part?

Even at only 92 minutes, the story has a tendency to drag. Dr. Blood's base of operations for his secret experiments is part of a long-abandoned tin mine, and he's constantly traveling back & forth from it. A large amount of screen time is taken up by Blood's attempts at romance with Linda. One can understand why Blood would be attracted to Hazel Court, but it's hard to fathom what she would see in him, since he seems such a dud. (Maybe it's due to the fact that Blood appears to be the only male in the local village under the age of 45.) There's no male good guy-John Agar-Kenneth Tobey type to act as a counterpoint to Blood--the closest equivalent is a police sergeant (Kenneth J. Warren) who spends most of his time wiping sweat off of his brow.

The big climax--in which Blood resurrects Linda's late husband in his tin mine laboratory, and then drags her to the location so she can witness the results--doesn't have the impact that it should. The makeup on the revived moldering corpse is highly effective, but the viewer doesn't get a lot of good looks at it. This is disappointing, since the resurrected fellow was a huge part of the movie's advertising campaign. Director Sidney J. Furie would go on to bigger and more mainstream films, but here he lets things meander along. He does make decent use out of the Cornish locations. The supporting cast is filled with character actors familiar to Hammer fans--Gerald Lawson, Fred Johnson, and Paul Hardtmuth.

It's a welcome surprise to see a veteran performer such as Ian Hunter in this type of film--he had spent a lot of time during the Golden Age of Hollywood in such classics as THE ADVENTURES OF ROBIN HOOD. And of course it's always a pleasure to see Hazel Court, one of the all-time great scream queens. Court makes Linda out to be an appealing and fully-dimensional person who is also still affected by her husband's death.

Shout Factory has released DOCTOR BLOOD'S COFFIN on Blu-ray through its Scream Factory label. The movie is presented in 1.85:1 anamorphic widescreen, and the print is above-average. The movie was shot in Eastmancolor and it looks very vivid here--for example, it brings out the shade of Hazel Court's lipstick. The major extra is an extensive image gallery, which features several stills of the resurrected corpse. These stills allow one to get a better view of the being than in the actual film, making it far easier to appreciate the makeup artistry used for it. The reverse side of the disc cover sleeve features advertising art that makes the film seem far more exciting than it really is. 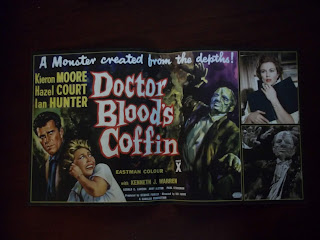