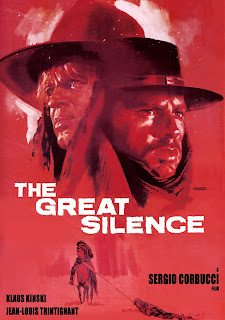 It's a great time to be alive if you are a Spaghetti Western fan. Nearly all of the outstanding examples of the genre have recently been released on special edition Blu-ray, and more of them are on the way. A company known as Film Movement is responsible for a full restoration of Sergio Corbucci's THE GREAT SILENCE, which is now also available on Blu-ray.

THE GREAT SILENCE doesn't have the popularity of more famous Euro Westerns, mainly due to its limited availability. But I believe that even if it had been shown on TV as often as the Sergio Leone Westerns, it wouldn't have as many fans as those films do. THE GREAT SILENCE is a bleak, haunting tale that resembles an art-house movie more than a action-packed revenge melodrama. Instead of the usual arid Spanish Spaghetti Western locations, director Sergio Corbucci chose the snow covered Italian Dolomite Mountains for the setting. The result is that everything is covered in white--the town the story is set in, the coaches, etc. This isn't a festive-looking winter, however--the atmosphere is harsh and mournful. The dead-of-winter ambiance, combined with Ennio Morricone's melancholy score and several outstanding shot compositions, gives THE GREAT SILENCE a haunting lyricism that makes it stand out from not only any other Euro Western, but all other Westerns put together.

Jean-Louis Trintignant plays Silence, a mysterious gunfighter whose moniker is more than just a nickname--his vocal cords were cut when he was a young boy. Silence takes it upon himself to protect a band of outlaws who are holed up near the appropriately-named town of Snow Hill in the Utah Territory during the 1890s. The outlaws (the movie never really explains what the group is wanted for) are in hiding from a vicious band of bounty hunters led by the cruel Loco (Klaus Kinski). To Loco, "Wanted Dead or Alive" means "Dead", and he proceeds to eliminate as many fugitives as possible to collect the rewards. The quick-on-the-trigger Silence is hired by a young widow named Pauline (Vonetta McGee) to kill Loco--it was Loco who killed the woman's husband. Snow Hill's new sheriff (Frank Wolff) tries to stop all the various killings, but he's no match for the venal Loco--and in the end, neither is Silence.

The character of Silence may seem to be just another in a long line of quiet, expressionless, Spaghetti Western leading men who are proficient at gunplay. What makes Silence different is that his affliction gives him a more human quality--he's not an indestructible killing machine. Silence is so fast with his Mauser semi-automatic pistol, he always lets his opponents draw first, that way he can claim self-defense. Silence could easily be the best bounty hunter of them all, but he doesn't seem all that interested in money. He even develops a relationship with Pauline, but he does not take advantage when she offers herself to him in lieu of payment for her wanting Loco dead. Unlike most Euro Western main characters, Silence actually has real human feelings, and they wind up being a disadvantage to him.

Jean-Louis Trintignant is fine as Silence, considering he's hampered by the fact that his character does not speak and barely shows any emotion. But it's Klaus Kinski who makes the biggest impression. Due to his unique features all Kinski has to do to properly portray a villain is to show up--but his Loco is particularly loathsome. Riding across the snow-covered locations and bundled up in a shawl, the snake-like Kinski appears nothing less than a true horseman of the apocalypse. His Loco takes fiendish delight in the fact that his murderous activities are all covered under the law. When Silence first confronts Loco and tries to get him to draw first, Loco outmaneuvers him by taking off his gun belt and punching Silence, an act which leaves the mute gunman stunned. Loco's biggest advantage over everyone else in the story is that he is willing to do anything and everything to accomplish his goals. THE GREAT SILENCE contains one of Klaus Kinski's best (and most devious) performances. (One thing I must mention--the Film Movement Blu-ray of THE GREAT SILENCE features an English dubbed dialogue track, and while most film buffs tend to look down on those, I have to point out that the weaselly, sarcastic voice used for Loco matches the character perfectly.)

The supporting cast contains many Spaghetti Western veterans, such as Luigi Pistilli, Mario Brega, and Frank Wolff, who plays one of the few honest & decent sheriffs in Euro Western history (not that those attributes help his character very much). Vonetta McGee's role is very unusual--and that's not just because she was an African-American. Her Pauline is not a helpless victim--she's a determined woman who is not afraid to stand up against Loco and his fellow bounty hunters. McGee's appearance in THE GREAT SILENCE makes the film seem years ahead of its time.

While THE GREAT SILENCE has a lot in common with other Sergio Corbucci films such as DJANGO and NAVAJO JOE, it is even more bleak and unremitting than those two. The ending of THE GREAT SILENCE has to be one of the most downbeat for any film. The new Film Movement Blu-ray includes two alternate endings, one of them a "happy" version that is so out of tune with the rest of the film that it comes off as comic. The depressing climax is brutally violent, as to be expected from Sergio Corbucci--but it is the dark, bitterly cold atmosphere and the magnificent cinematography from Silvano Ippoliti that one remembers the most after viewing this film. I think that by far this is Sergio Corbucci's best overall directorial effort.

The Film Movement Blu-ray of THE GREAT SILENCE is a stupendous-looking restoration, and it appears to be the uncut version of the film. It has a choice between the Italian or English dialogue track, and English subtitles are available. There's also a number of extras, including an illustrated booklet which has an essay on the film by Simon Abrams.

If you are the type of person who thinks CHISUM is a great Western, then THE GREAT SILENCE probably isn't for you. Despite its bleakness and its refusal to make concessions for a mainstream audience, THE GREAT SILENCE is well worth seeking out.