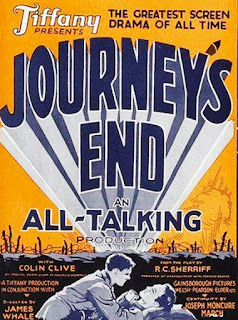 On the weekend of June 22-24 of this year, I attended the annual Monster Bash Conference in Mars, PA. One of the major highlights of this event for me is attending one of author Greg Mank's informative and entertaining presentations. Greg has made an immeasurable contribution to the field of classic cinema history due to his research on the lives of so many people involved in the making of the most famous Hollywood horror and science fiction films. Greg's talk at Monster Bash this year centered around the life of English actor Colin Clive, who will be remembered by most for playing Dr. Frankenstein in Universal's FRANKENSTEIN and THE BRIDE OF FRANKENSTEIN. During his talk Greg discussed the actor's tragic and short life, in which alcoholism played a part.

At the end of his presentation, Mank noted that June 25 would mark the anniversary of Colin Clive's death in 1937. Greg suggested that we stop and think about Clive in some way on that date. I decided on that night to watch JOURNEY'S END, the film version of the British play that gave Clive his first major success as an actor.

The 1930 film version of JOURNEY'S END was backed by British producers, but it was filmed at Tiffany Studios in Hollywood to take advantage of American sound equipment. James Whale, who had originally directed the play to great acclaim in England, would direct the film version. Whale was already in America--he had come across the Atlantic to help stage new productions of JOURNEY'S END on stage, and he went to California to direct dialogue scenes for two films: THE LOVE DOCTOR and Howard Hughes' HELL'S ANGELS. Whale was adamant that the movie version stick as closely as possible to the text of the play by R.C. Sherriff, and he was equally adamant that only one man could fill the leading role of Captain Stanhope--the man who had played him so movingly on the British stage, Colin Clive.

Clive was given leave from the English stage production of JOURNEY'S END to travel to Hollywood and star in the film version. (The agreement to do this stipulated that Clive had to return to England and the play at a certain date, leaving very little time for actual filming.)

I viewed the 1930 film version of JOURNEY'S END on YouTube. It is nowhere near as cinematic as James Whale's later work, and the quirky English eccentricity his movies are known for is mostly absent here. Whale keeps to the situation at hand--almost the entire story is set in the dugout quarters of Captain Stanhope and his men. (There was talk during the production of "opening up" the play with added scenes, but thankfully this was avoided.) Today the movie may seem rather quaint and very stagy to most audiences, especially those who are not familiar with early sound films.

The story is set in 1918 on the Western Front. Captain Stanhope (Colin Clive) is a respected British Army officer, but nearly three years of combat have taken its toll. Stanhope has to drink constantly in order to function. The only person who really understands the brooding, self-loathing Stanhope is the older, mild-mannered Lt. Osborne (Ian MacLaren), who the other men refer to as "Uncle". As if Stanhope didn't have enough troubles, there's a new arrival to the unit--the young and naive Lt. Raleigh (David Manners). Raleigh knew Stanhope before the war--the young man is in fact the brother of the girl Stanhope left behind. Stanhope fears that his present condition will meet with disapproval from Raleigh, and that the young man will inform his sister about it. Adding to the tension is an expected German attack. Stanhope's commanding officer orders a reconnaissance mission into German lines to bring back a captive in order to find out exactly when the attack will take place. The kindly Osborne is killed during the mission, driving Stanhope further into despair. In the end the Captain comes to the end of his own personal journey.

This film version of JOURNEY'S END makes very little concessions to a mainstream audience. There is no escape from the drudgery of life on the Western Front, and what little humor the film has is provided by Charles Gerrard as an orderly. (Gerrard had a similar role in the 1931 DRACULA.) Colin Clive dominates the entire proceedings as Stanhope--he's nearly in every scene. On the surface Clive's Stanhope appears sarcastic, edgy, and extremely touchy--but the actor also shows the pain and sensitivity that is tearing the man apart inside. Clive's performance is immensely helped by the many close-ups provided him by James Whale's direction--they tell us what Stanhope is really thinking and feeling. Clive was on the verge of turning 30 when this film was made, but he appears about a decade older--it's as if the entire emotional weight of the Great War is etched on his gaunt face. It's not easy for a viewer to spend so much time watching a character like Stanhope, but Clive gives an outstanding portrayal, and one has to wonder if JOURNEY'S END had been made at one of the major Hollywood studios whether Clive might have copped a Best Actor Academy Award nomination.

Thankfully the rest of the cast was not "Americanizied". Ian McLaren is good as Osborne, but I would have loved to have seen George Zucco, who played the role to great acclaim on the stage, repeat his part in the film. David Manners is just right as the callow Raleigh, and silent film comedian Billy Bevan is here as well, although he's unrecognizable without his mustache.

JOURNEY'S END is readily available on YouTube and public domain home video, but it deserves a high-class proper restoration and release...and if does happen, hopefully there will also be an audio commentary by Greg Mank and/or James Curtis. The importance of the 1930 version of JOURNEY'S END to cinema history cannot be underestimated. If James Whale had not been able to direct it, and if Colin Clive had not been brought over to star in it....we certainly wouldn't have gotten the 1931 FRANKENSTEIN, (at least not the version we know now) and THE BRIDE OF FRANKENSTEIN wouldn't have existed.

Because of his superb Captain Stanhope, Colin Clive spent the rest of his too-short acting career playing edgy, emotionally fragile characters...and many of these roles sadly reflected the troubles Clive experienced in his own life. Whatever you may think of Colin Clive's acting style, you cannot deny that the man was a truly singular performer. There has never been anyone else quite like him, nor will there be.
Posted by Dan Day, Jr. at 9:09 AM