THE VAMPIRE AND THE BALLERINA On Blu-ray From Shout Factory 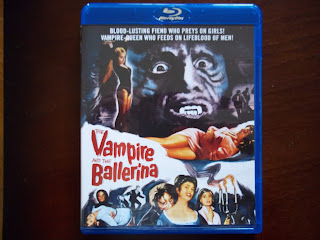 I did a full review on the 1959 Italian Gothic horror tale THE VAMPIRE AND THE BALLERINA in November 2016. Shout Factory, under its Scream Factory label, has recently released the movie on Blu-ray. and it is a fine upgrade from the many grey-market and YouTube presentations of the film.

The picture quality on this disc is generally excellent. There's a few instances of wear & tear (which is to be expected from a foreign title of this age), but overall the visuals are rather sharp, and they bring out the best of Angelo Baistrocchi's atmospheric black & white cinematography. The sharpness of the visuals also shows the inadequacies of the vampire makeup worn by Walter Brandi.

This Blu-ray, which is Region A, shows the movie in 1.66:1 anamorphic widescreen, with Italian title credits (which names it as L'AMANTE DEL VAMPIRO). An Italian audio track is included, with English subtitles, along with an English dub track. The only extra is an extensive image gallery, which shows stills from the film and the various advertising campaigns for it. The gallery also reveals that at one time in the U.S. the movie was screened as part of a kiddie matinee! The inside of the Blu-ray case sleeve has a picture of some of the ballerinas performing one of their burlesque-like routines. Unfortunately there is no audio commentary, because a movie like this really needs one.

THE VAMPIRE AND THE BALLERINA isn't among the best of the Euro Gothics, but it is an entertaining tale that would make a great introduction to classic Italian horror cinema. Shout Factory deserves major credit for giving this film a proper home video release, and I hope they have plans to bring out similar films of this type in the future.