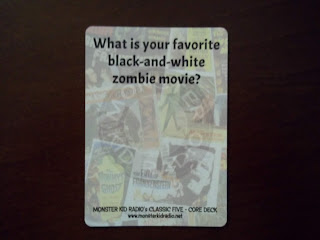 Now, there isn't really of lot of choices for this question. When it comes right down to it, for me anyway, there's only three: WHITE ZOMBIE, I WALKED WITH A ZOMBIE, and NIGHT OF THE LIVING DEAD (the original version, of course).

I WALKED WITH A ZOMBIE is an excellent film, but like most of the Val Lewton RKO thrillers, at times it seems too stately for its own good. The original NIGHT OF THE LIVING DEAD is the ultimate true modern horror film, and I also believe it is the most influential American independent film of all time.

Now WHITE ZOMBIE...I'm a huge fan of that movie. It has a distinctive, weird fairy tale quality to it. Yes, at times it feels archaic and amateurish (especially in the acting of some of the supporting cast), but I think that reinforces the unusual atmosphere. WHITE ZOMBIE doesn't have the polish of a major studio production, and for whatever reason that makes the film have more impact for me.

The major reason I favor WHITE ZOMBIE is Bela Lugosi's performance as zombie master Murder Legendre. Bela truly is a show in himself here....he's made up to look like a malevolent Satan, and you can tell he's clearly enjoying himself in the role. He makes the most out of several memorable lines of dialogue ("We understand each other better now." "For you, my friend, they are the angels of death.") and he's afforded many expressionistic close-ups. I honestly think that Bela has more of a showcase in WHITE ZOMBIE than he does in the 1931 DRACULA!

If Bela wasn't in WHITE ZOMBIE, this movie would definitely suffer. Supporting players Madge Bellamy, Robert Frazer, and John Harron are all a bit ragged (I don't think working with actors was one of director Victor Halperin's strengths), but they do accentuate the movie's bedtime story mentality. The characterizations are not important here--it's the overall creepiness, the sense of long-ago dread that pervades throughout. One of the most notable sequences in the film is when we are shown Lugosi's zombies slaving away at his mill. The sound of the mill grinding away--I can hear it even while writing this!--that chalkboard scratching-like noise is one of the greatest movie sound effects I have ever heard.

So WHITE ZOMBIE is my favorite black & white zombie movie. It is old-fashioned and kind of silly, but try watching it alone late at night. It still has the ability to fascinate, especially since it features one of Bela Lugosi's most impressive performances.