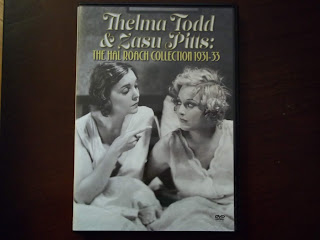 This summer Classic Flix released the entire series of Thelma Todd-Patsy Kelly short subject comedies on DVD, and now the Sprocket Vault brings us the complete Thelma Todd-Zasu Pitts series on DVD as well. The Todd/Pitts/Kelly comedies, produced at the Hal Roach Studios, are now finally all available officially on home video.

Whoever came up with the idea to team Thelma Todd and Zasu Pitts knew what they were doing. The gorgeous Todd and the flighty, spinsterish Pitts were as different on-screen as two women could be, but they made an effective comedy duo. The ladies were a believable screen couple (they were friends in real life as well), and despite the crazy antics they had to go through, they still came off as appealing and likable.

I have to rate the Todd-Pitts shorts a bit higher than the Todd-Kelly series. The Todd-Pitts series has much more of a Pre-Code vibe to it--Thelma takes her off dress, or gets it torn off, in just about every entry (not that I'm complaining). The ladies are definitely put through the wringer in these films when it comes to physical slapstick. If one watches these shorts closely one can see visible bruises on both Thelma and Zasu. Richard Roberts, who provides audio commentaries on many of the films in this set, surmises that Zasu Pitts may have left the series not just due to monetary reasons--she may have been tired of being knocked around so much. I agree with that premise--Zasu really does get a workout, and she doesn't look very comfortable while having to engage in the horseplay. (By the way, despite the title of this DVD set, it is Zasu who gets top billing in all the shorts.)

Thelma Todd gets her share of knocks as well, but she still looks absolutely fantastic no matter what (her smile is simply devastating). Watching these shorts I began to wonder if it was a waste that someone as photogenic as Thelma spent so much time doing this type of comedy. But one has to consider that today Thelma's cult continues to grow and grow, while many of her female acting contemporaries who had starring roles in major films are basically forgotten.

My favorites among the Todd/Pitts shorts include ON THE LOOSE, which has the ladies complaining about being constantly taken on dates to Coney Island, only to find out their new beaus are treating them to a day at...Coney Island. This short also features a famous cameo at the end. THE BARGAIN OF THE CENTURY is an excellent entry, mainly due to the fact that it was directed by Charley Chase. SHOW BUSINESS is notable for being directed by Jules White, and it actually would be reworked as a Three Stooges short called A PAIN IN THE PULLMAN. ONE TRACK MINDS is my pick for the best of them all. It has the girls taking a train trip to Hollywood, were Thelma hopes to become a big star. This entry co-stars Spanky McFarland, Sterling Holloway, and Lucien Prival as a Von Stroheim-like movie director. The rest of the shorts are filled with performers familiar to fans of classic Hollywood comedy, such as Anita Garvin, Billy Gilbert, Charlie Hall, and Bud Jamison.

The Sprocket Vault has put an on-screen disclaimer on this set saying that the shorts included here may not be in the most prime condition, but they all looked fine to me...I would even say that visual & sound quality here is better than the Classic Flix Todd/Kelly set. The Sprocket Vault released a set of Charley Chase at Hal Roach shorts earlier this year, and this Todd/Pitts set has similar extras. Each short subject is treated to an audio commentary, and film historians Richard W. Roberts, Randy Skretvedt, Brent Walker, and Robert Farr do the honors. All four men spend quite a bit of time going over in minute detail the career histories of various supporting actors and bit players who appear in the shorts. They are so determined to do this that it feels at times that they forget about the shorts they are commenting on. Much information is repeated by the commentators, so that a few biographical sketches are given two or three different times. I'm not trying to knock these commentaries--I commend Sprocket Vault for including them--it's just that I wish the men had spent more time discussing Thelma and Zasu, and analyzing the series as a whole. (At least the commentaries tell you how to properly pronounce Zasu's name--it's "SAY-ZOO".) A stills gallery is included as well.

I sincerely hope Sprocket Vault comes out with more sets showcasing productions from the Hal Roach studios. Having all the Thelma Todd/Zasu Pitts/Patsy Kelly comedies on official home video has been a long time coming, but it's well worth it. For the most part these shorts hold up very well, and it's nice to watch something humorous that doesn't remind you of the real-world problems that we have to put up with today.