THE SATANIC RITES OF DRACULA On Blu-ray From Warner Archive 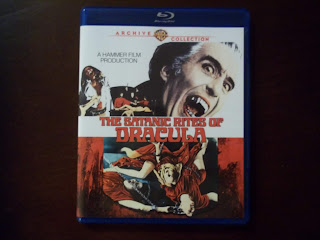 The Warner Archive Collection follows up its Blu-ray release of Hammer's DRACULA A.D. 1972 with that movie's sequel, THE SATANIC RITES OF DRACULA (1973).

THE SATANIC RITES OF DRACULA was the last Hammer Dracula film to feature Christopher Lee. It continues the modern setting of DRACULA A.D. 1972, along with many of that film's characters, such as Peter Cushing's Dr. Van Helsing, Michael Coles' Inspector Murray, and Jessica Van Helsing (this time around portrayed by Joanna Lumley). While DRACULA A.D. 1972 had a goofy mod sensibility and was rated PG, SATANIC RITES is much darker in tone and was rated R. SATANIC RITES features such things as a young naked girl being stabbed as part of a....satanic rite, and a putrefying plague victim.

Director Alan Gibson and screenwriter Don Houghton (both returning from DRACULA A.D. 1972) give this entry more of an urban crime thriller feel, with motorcycle chases, fistfights, and sniper attacks. John Cacavas' music score (which I am listening to on CD right now as I write this) also has a cop movie-Lalo Schifrin feel to it. Houghton's story has a number of far-reaching elements that the actual movie doesn't have the budget to live up to. In SATANIC RITES Dracula is in disguise as a mysterious tycoon, almost a Bond villain type, who is using various influential members of the British ruling class to help bring about his final vengeance on mankind.

Many have compared the SATANIC RITES plot to that of an episode of THE AVENGERS, but Jonathan Rigby in his seminal book ENGLISH GOTHIC makes the case that it seems more like a DOCTOR WHO serial (a show which Don Houghton wrote several stories for). Imagine the characters of Van Helsing, Jessica, and Inspector Murray being replaced by the Doctor, one of his female companions, and the Brigadier, and substitute the Master for Dracula, and you'll know what Rigby means.

I've never been much of a fan of THE SATANIC RITES OF DRACULA, but after seeing it in such pristine condition, I have to admit the story seemed to flow a little bit better. What more praise can I heap on Peter Cushing? He basically explains all the plot points of the movie and has them not only make sense, but feel important as well. Christopher Lee gets a bit more to do as the Count than usual in a Hammer Dracula movie, but you still get the feeling it's not enough. (He does get to use a Bela Lugosi-like accent during a scene in which he is trying to hide his identity.)

Freddie Jones has a small but memorable role as one of the influential men Dracula is using, and Valerie Van Ost has a notable part as one of Dracula's victims. Joanna Lumley is hindered by a new characterization for Jessica Van Helsing. When Jessica was played by Stephanie Beacham in DRACULA A.D. 1972, she had a spunky aspect to her, and she was as different from Dr. Van Helsing as one could imagine. Here, she's mentioned in dialogue as being an important assistant to Dr. Van Helsing, but she doesn't do much of anything except wind up in Dracula's clutches at the climax.

THE SATANIC RITES OF DRACULA is a long way away from the glory days of Hammer, but it does feature a couple of great Cushing-Lee confrontations, including the very last time the two would battle each other on-screen.

The Warner Archive Collection's Blu-ray of THE SATANIC RITES OF DRACULA is by far the best I have ever seen this movie look. The film has had a tortured history on home video, with several public domain versions and even a few that were actually the American release version of the film which was titled COUNT DRACULA AND HIS VAMPIRE BRIDE. The Warner Archive Blu-ray is the full original uncut version of the film, and it is presented in 1.78:1 anamorphic widescreen. The picture is much sharper and clearer than all the other versions, and the sound is vastly improved as well, being in DTS-HD. The only extra is a trailer, but thankfully it is one for the original release version, not one of those floating around for the COUNT DRACULA AND HIS VAMPIRE BRIDE theatrical release.

Simply put, this Blu-ray of THE SATANIC RITES OF DRACULA is the only one of this title any Hammer fan needs to own.
Posted by Dan Day, Jr. at 11:58 AM