THE WASP WOMAN On Blu-ray From Shout Factory 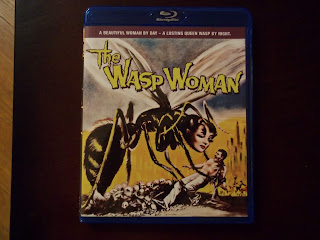 The 1959 Roger Corman THE WASP WOMAN isn't one of the director's better films, and it's not even one of the more notable fantastic films of its period--so why did Shout Factory give it a major Blu-ray release? Because that's what Shout Factory does, and let's all give thanks that they do it.

THE WASP WOMAN contains elements of THE FLY, THE WOLF MAN, and the Jekyll & Hyde story. Set in contemporary times, the tale concerns Janice Starling (Susan Cabot), the head--and main spokesmodel--of a major cosmetic company. The company's sales are starting to go down, and Janice is worried it may be due to the fact she's not as young as she used to be--she's now (gasp) entering her forties! A mysterious Dr. Zinthrop (Michael Mark) creates a serum from royal wasp jelly that he claims rejuvenates animals--and Janice decides to test it on herself. The serum works--all too well, as various complications ensue (the title of this movie is THE WASP WOMAN, after all).

THE WASP WOMAN is an okay little film (its original running time is around an hour), but I don't think it even ranks among the best of Roger Corman's 1950s movies, such as NOT OF THIS EARTH. What helps it the most is the lead performance by Susan Cabot. Instead of going to extremes with the character of Janice Starling, Cabot makes her believable and likable. Janice doesn't come off as obsessed with youth or beauty (at the beginning of the film she in fact doesn't look all that much different then when she becomes "younger"). Instead of ranting or raving, Cabot brings a measured tone to the film which offsets the more outlandish parts of the story. When she is in Wasp Woman mode the makeup is about what one would expect from a movie of this type made during this period, but in context I think it works.

Several members of the Roger Corman stock company had a hand in THE WASP WOMAN, either in front or behind the camera. Among the supporting players are Corman vets such as Barboura Morris and Bruno Ve Sota. Actor Leo Gordon, another long-time Corman associate, co-wrote the script, and Gordon's wife, Allison Hayes-lookalike Lynn Cartwright, has a small but memorable role as a smart-aleck receptionist. Future Spaghetti Western star Frank Wolff also has a tiny but showy role as a moving company employee. Michael Mark, who plays Dr. Zinthrop, was in several classic Universal horror films--Corman of course would use more famous Universal monster veterans such as Karloff, Lorre, Chaney Jr., and Rathbone in his Edgar Allan Poe adaptations. Roger Corman himself makes an acting cameo in the movie as a doctor, and his brother, co-producer Gene Corman, also puts in an appearance.

Shout Factory touts this disc of THE WASP WOMAN as presenting a new 2k scan of a fine grain print, and the black & white picture is razor sharp, with a full, clear soundtrack to go with it. The movie is in 1.85:1 anamorphic widescreen.

What really makes this Blu-ray desirable are the extras. Shout Factory provides two different excellent commentaries. Troy Howarth gives a talk that is wry, informative, and entertaining. He discusses all the relevant details of the film, and he makes the case that Roger Corman should be credited with being economically creative instead of being called cheap. Tom Weaver's commentary focuses mostly on the life and career of Susan Cabot, who Weaver got to know personally in the mid-1980s. Cabot's life after her film career is a sad and bizarre one, as told by Weaver. Her story involves such subjects as King Hussein, growth hormones, and murder. Weaver takes some time off to allow Dr. Robert J. Kiss to give a short discussion on the theatrical and TV releases of THE WASP WOMAN.

Also included on this disc is the television version of THE WASP WOMAN, which runs about 10 minutes longer (apparently the theatrical version was too short for a movie on TV time slot). The added 10 minutes are at the beginning (the commentators credit them being directed by Jack Hill), and the sequence concerns footage of Dr. Zinthrop and his wasps--it's not really all that important to the rest of the story.

Some might consider the idea of  Shout Factory putting so much effort into a release of something like THE WASP WOMAN as overkill, but all that effort was why I bought the disc.