THE SAINT--"The Man Who Gambled With Life"


While going through my XfinityOne on-screen guide recently, I found out that I have free access to nearly every episode of the classic 1960s British TV series THE SAINT starring Roger Moore. This has allowed me the opportunity to view one particular episode that I've always wanted to see--a season six story entitled "The Man Who Gambled With Life", featuring the lovely Veronica Carlson.

"The Man Who Gambled With Life" has plenty of horror/science-fiction connections other than Veronica. The episode was directed by Freddie Francis, who helmed several English Gothic feature films for Hammer and Amicus. The man who plays the main threat to Roger Moore's Simon Templar in this story, Clifford Evans, had appeared in two fine Hammer films, THE CURSE OF THE WEREWOLF and THE KISS OF THE VAMPIRE. Barry Andrews also appears in this tale--he co-starred with Veronica Carlson, and under Freddie Francis' direction, in DRACULA HAS RISEN FROM THE GRAVE. Hedger Wallace, who played small roles in many of Freddie Francis' films, has a supporting part here as well.

The actual story in this episode, written by Harry W. Junkin, has many horror/science-fiction elements on its own. The suave Simon Templar has encounters with two gorgeous blonde sisters, who make quixotic statements about death. The Saint tracks down the ladies to a large remote country house, which is owned by a rich entrepreneur named Keith Longman (Clifford Evans). The ladies, Vanessa (Veronica Carlson) and Stella (Jayne Sofiano) are Longman's daughters. After he infiltrates Longman's home, the Saint finds out from the man himself that he is experimenting with cryogenics. Longman has a bad heart, and he is determined to freeze himself into suspended animation until years later, when he assumes that heart transplants will be simple and common. Longman's freezing process has never been tested on humans--and he believes that the Saint will be the perfect subject.

"The Man Who Gambled With Life" also has a James Bond tinge to it--and I'm not referring to Roger Moore. Keith Longman seems very much like a Bond style villain. He's highly intelligent, cultured, and he spends a lot of time dressed in a smoking jacket. In true Bond villain fashion, Longman is the one who reveals the plot details to the hero. Longman's home could easily be a subsidiary of SPECTRE--it contains hidden control rooms bristling with computer banks and secret underground passages. Longman even has a platoon of uniformed security guards--and just like in the Bond films, the goons don't really amount to much.

Clifford Evans is a fine foil for Roger Moore, but let's face it, the Longman sisters are the ones who steal the show. Jayne Sofiano's Stella is the more emotional of the two, and she even winds up going against her father and helping out the Saint (another Bondian plot device--the bad girl who is so won over by the hero she joins his side). Vanessa Longman is very different from the usual nice girl roles Veronica Carlson would play in her career. Vanessa is determinedly devoted to her father's plan, and Simon Templar's charms have no effect on her (I don't even think Veronica genuinely smiles once during the entire episode). Veronica's role isn't actually very big, and that's a shame, because she looks absolutely stunning, especially when she's wearing the costume shown in the picture below. 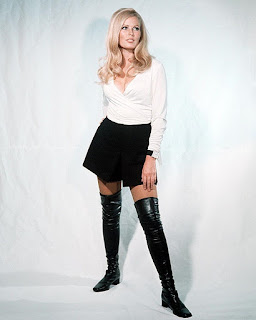 
"The Man Who Gambled With Life" is like most episodes of THE SAINT--it's fun, entertaining, and it's not too heavy or complicated. Roger Moore is his usual likable self, and his charisma makes the episode all the more enjoyable. At one point Moore even tosses off a reference to Mrs. Peel of THE AVENGERS (I laughed out loud at that). Freddie Francis doesn't get much of a chance to show off his visual sense, but in all honesty, his best shots are when Veronica Carlson is in front of the camera. The story has all sorts of wild aspects to it (including a gorilla in a cage!), but it's played rather straight, and it even has a very unexpected (and disarming) ending. All in all, "The Man Who Gambled With Life" is a prime example of classic television.