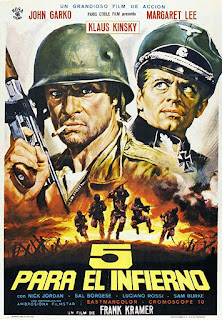 FIVE FOR HELL (original Italian title 5 PER L'INFERNO) is a 1969 Italian WWII action adventure that tries to fit the mold of such films as THE DIRTY DOZEN and WHERE EAGLES DARE. This movie, however, is at a far lesser scale than those big-budget epics.

The story is set during the Italian Campaign of World War II. Brash American Lt. Hoffman (played by the official Sartana, Gianni Garko) gathers together four other soldiers with special skills--an acrobat, an explosives expert, a safecracker, and a muscular fellow--to take on a secret mission. The five are to be transported behind enemy lines, where they will attempt to infiltrate the Italian headquarters of the German High Command, break into a safe, and steal the plans for an upcoming offensive against the Allies. As expected, the mission doesn't come off quite as planned, as the five have to deal with a sultry German army secretary who may or may not be a double agent (Margaret Lee) and a determined SS Colonel (Klaus Kinski).

FIVE FOR HELL is basically a Spaghetti Western set during the Second World War. The problem is the more bizarre elements of that genre do not stand up too well when inserted into a story involving history's greatest conflict. This movie was directed and co-written by Gianfranco Parolini, under his "Frank Kramer" pseudonym. Parolini was the man who inaugurated both the Sartana and Sabata movie series, and many of the aspects of those films can be found in FIVE FOR HELL. There's a fair amount of goofy humor that doesn't work, and Parolini's penchant for circus-style stunts (which he used repeatedly in the Sabata films) is firmly in evidence here. The five heroes use such weapons as a trampoline and a softball, and the gags resulting from these instruments get more outlandish as the story goes along.

The Spaghetti Western influence extends to the cast as well. Besides Gianni Garko, three of the men who portray members of his group--Aldo Conti, Sal Borgese, and Luciano Rossi--were longtime Euro Western veterans. Samson Burke, who plays the muscle of the unit, was Hercules in THE THREE STOOGES MEET HERCULES (how many people can claim they worked with the Stooges and Klaus Kinski??).

Speaking of Kinski, his portrayal of SS Colonel Hans Mueller is predicated more on smugness than viciousness. He does make a viable threat (what else would Kinski play in a WWII movie?), and, as usual, he steals every scene he's in. Kinski spends most of his time leering at Margaret Lee, a Eurocult actress and Jess Franco favorite. Lee's double agent character winds up bedding Kinski's SS Colonel to distract him (I'm sure Klaus wasn't complaining about that scene).

As he does in his Spaghetti Westerns, Gianni Garko brings a lot of screen presence to the role of Lt. Hoffman. He's actually quite believable as a WWII American army officer, even though the actions of him and his team are not. FIVE FOR HELL has a lot of explosions and a rousing climax featuring a machine gun battle, but like a lot of Italian films made during this period that attempted to imitate more notable American-made productions, it bites off more than it can chew. The movie attempts to be a hard-edged war tale, but there's too much bizarre stuff going on to take it more seriously--such as a music score which seems cobbled together from a bunch of other movies which are not war films.

The version of FIVE FOR HELL that I viewed was English-dubbed, with English titles, and it was not in widescreen. A Italian language subtitled version in the correct aspect ratio might be much better...but my final verdict has to be that Gianfranco Parolini was much better at Westerns than at war.