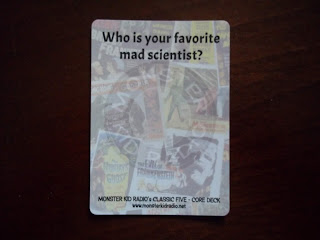 When it comes to favorite mad scientist character, there's so, so many to choose from....just off the top of my head, there's Boris Karloff's Dr. Gustav Niemann in HOUSE OF FRANKENSTEIN, Lionel Atwill's Dr. Otto von Niemann in THE VAMPIRE BAT, George Zucco's Dr. Alfred Morris in THE MAD GHOUL, and Ernest Thesiger's Dr. Pretorius in THE BRIDE OF FRANKENSTEIN. And what about Bela Lugosi's Dr. Vollin in the 1935 version of THE RAVEN?

I could go on naming dozens of others, but my ultimate pick for favorite mad scientist character of all time came to me rather easily. It's C. A. Rotwang, as played by Rudolf Klein-Rogge, in Fritz Lang's magnificent silent epic METROPOLIS. 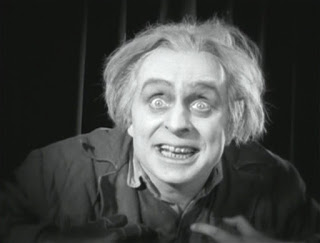 I was totally mesmerized by METROPOLIS from the first time I saw it, and I remain so to this day. The character of Rotwang is so striking, so intriguing, so mysterious, so....expressionistic, you can't help but be overwhelmed by him. He dresses like a mad monk, he lives in what appears to be a medieval cottage smack dab in the middle of futuristic ultra-modern city, and he has abilities and talents far beyond that of the average member of the populace. Despite the ancient trappings of his abode, he has a laboratory filled with all sorts of complicated equipment, and he seems to have managed to create for himself a fully functional prosthetic right hand.

He has also managed to create one of the most iconic characters in movie history, a rather shapely robot who is given the appearance of the beautiful young Brigitte Helm. This "False Maria" almost brings the entire society of Metropolis down, which is what Rotwang had in mind in the first place--the woman he loved (and lost) married the Master of Metropolis.

Nearly every mad scientist trope you can come up with is represented by Rotwang. His looks, his actions, his creations, his righteous anger, his quest for revenge....all these elements would be used over and over and over again in hundreds of fantastic films, and they are still being used today. Out of all the movie mad scientists, Rotwang is the one that has fascinated me the most, the one that has had the most effect upon my imagination.

Now, for my favorite mad scientist actor--once again, there's plenty of worthy candidates....Karloff, Lugosi, Carradine, Zucco....you may have wondered why I haven't mentioned Peter Cushing yet. In all honesty, I've never thought that the scientists that Cushing played were mad--they were dedicated and dangerous, but I never believed they were totally off the rails.

There's one actor, though, who was the expert when it came to playing scientists who were totally off the rails--and that was Lionel Atwill. When Atwill was playing one of his many mad scientist characters, his eyes would light up with an insane glee, he'd usually have a wicked smirk on his face, and no one--men, women, children, or animals....was safe. It also appeared to me that Atwill enjoyed portraying loony medicos...he seemed to take it up a notch. If I had to pick just one actor in all of movie history to play a mad scientist, it would be Lionel Atwill. 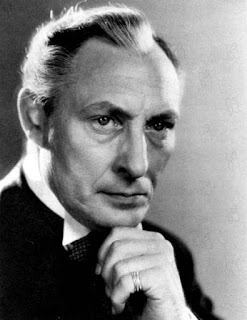